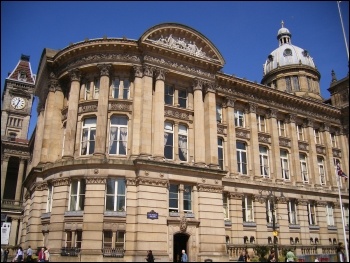 Trade unions representing Birmingham council workers have reached an "historic agreement" with the council which will mean a three-year pay freeze, instead of reduced sick pay, increased hours, a 1.35% pay cut and other cuts.

Mark New, Unison's regional organiser for the West Midlands said: "Working on the front line, the staff have a real understanding of the financial difficulties at the city council."

The unions have effectively accepted that here can be no money found to fund decent public services delivered by well paid staff. This is in complete contradiction to the anti-austerity message of Jeremy Corbyn and most Labour Party members and supporters.

Such a surrender never has and never will lead to 'fairer funding'. The route to fairer funding is the drawing up of a no-cuts budget backed up by a campaign of mobilising public support for anti-austerity policies and industrial action if more cuts are threatened. Ultimately, a campaign like Liverpool City Council's against Thatcher in the 1980s is what is needed, not more knee bending by councillors and union officials.

Council deputy leader Ian Ward added: "This historic agreement between the council, its staff and the trade unions who represent them clearly demonstrates the value of Labour-controlled local authorities. Not only have we been able to deliver a better deal for Birmingham but have secured a fairer plan for the staff who run the city."

What utter nonsense. What use is a Labour council when they carry out job culls and pay freezes? A pay freeze certainly isn't fair on hard pressed council workers.

This deal can easily undermine the national pay agreements that cover council workers and be a catalyst for widespread pay freezes across the country. Jeremy Corbyn must take action against these councillors.