Arbitrary selection of ideas to confirm feelings of powerlessness 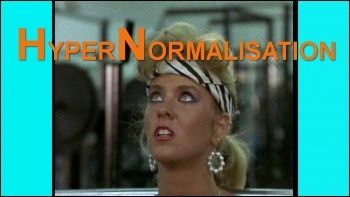 Adam Curtis's latest documentary focuses on feelings of powerlessness in the face of political corruption, but puts little forward   (Click to enlarge)

The term, he tells us, was coined by a "Soviet writer" to describe the situation towards the end of the Soviet Union. Everyone could see that what their leaders told them wasn't true, but, according to theory, they went along with it anyway because they saw no alternative.

Similarly, Curtis poses, the leaders of the Western world are creating a simplified version of the world to suit their needs. His narrative sweeps over a multitude of events, starting in the 1970s, from the affairs of Donald Trump, Hafez and Bashar al-Assad in Syria, and Colonel Gaddafi in Libya, in their relations with the USA, to the creation of the internet, UFOs and the Occupy movement.

In some of Curtis's earlier work there is more of an emphasis on issues like the growing inequalities in society. But while 'HyperNormalisation' does make the point that our politicians are corrupt, the emphasis is on the general idea that nothing can be changed.

This is the fundamental problem with the documentary. It is about the feeling of powerlessness, the failure of 'democracy', the lack of hope for the future, and the blurring of fact and fiction in official narratives. The way that this is conveyed is through a complete embrace of it.

He gives us a cursory glance at what seems like a rather arbitrary selection of events and ideas, explaining how they confirm his argument, without providing any hints as to alternative ways of looking at things.

While Curtis is correct that the Occupy movement suffered from its lack of an end goal, he fails to see its social significance, and explains it simply as an expression of the "original dream of the internet." Similarly, in the Egyptian revolution, people are described as "organised by the internet" and summoned to protests by Facebook, completely dehumanising the movements.

That 'the internet' should have been the power behind these uprisings is, of course, absurd. While phenomena like social media may be useful means of communication, that is still what they are - means of communication, used by people to organise themselves. In fact, in response to revolutionary tensions, the Egyptian state actually shut the internet down. The movement went on regardless.

In the end, Curtis' vision of a 'hypernormal' world just confirms the feeling of powerlessness many feel.

But the rise of new political struggles, like the movement around Jeremy Corbyn, shows people are unwilling to 'go along with it' anymore. Rather than trying to drag politics back into the doldrums, the task is to point a way forward - as the Socialist Party does.