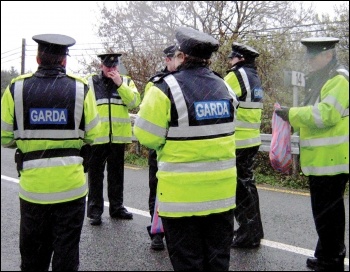 A strike threat by Irish police forced a major climbdown from the government over pay, photo by Shell to Sea (Creative Commons)   (Click to enlarge)

Pay deal acts as spur to other workers

Planned for Friday 4 November, the first of three days of open strike action by Gardai (police) in the history of the Irish state was only averted at the last minute following concessions from the government. But in making such concessions other workers are now determined to win back pay that was cut following the 2008 capitalist crisis. Conor Payne from the Socialist Party (CWI Ireland) reports on the gathering political storm.

The strike threat posed a significant crisis for the government and the state. An order from Noirin O'Sullivan, Garda Commissioner, to report for duty was due to be ignored by the vast majority of Gardai, with only 300 senior Gardai and 950 student Gardai listed for duty the night before the strike, according to the Irish Times.

The action would have been in violation of the ban on Garda strikes and represents an unprecedented split in the state apparatus.

Prior to the strike right-wing journalist Stephen Collins noted in the Irish Times: "The upholders of the law are threatening to break the law in pursuit of their own self-interest... The challenge to the authority of the state is one the government simply cannot afford to bow to on a point of principle, apart altogether from the financial implications."

The question of how to respond to this would have caused enormous problems for the government. This is illustrated by the reports that the introduction of Martial Law was threatened during talks with Garda Representative Association (GRA) officials.

After years of austerity and crisis, workers in both the public and private sectors are demanding their share of the much vaunted economic 'recovery', while the government pursues a policy of wage restraint.

Strike action by bus and tram drivers in Dublin won significant gains for those workers, showing that a militant stance brings results.

The government is currently in conflict with teachers who are locked out of secondary schools across the state. It is also facing demands for restoration of pay that was cut during the crisis from workers across the public sector.

In this context the concessions won by the GRA, worth around €6,000 a year to Gardai, are significant.

Minister for Finance Michael Noonan says the government cannot afford to extend the pay deal offered to gardaí to all public sector workers. However, the deal is a spur to action by other workers and can put pressure on the trade union leaders. Already five public sector unions have come out calling for pay increases for their members.

Meanwhile there were significant divisions in the GRA on whether to accept the deal offered or go ahead with the strike, and it remains to be seen if the Gardai will accept it in their ballot - which ends on 28 November.

The Socialist Party supports the right of the Gardai to organise and to strike. A victory for them significantly strengthens the hand of workers fighting for pay rises.

However, there is a contradiction in GRA members going on strike against austerity while allowing themselves to be used to impose austerity on working class people as they have during the water charges movement and on many other occasions.

This raises the fundamental question of who controls policing and whose interests it serves. We need policing which operates under the democratic control of working class communities, rather than defending the interests and rule of the capitalist class.