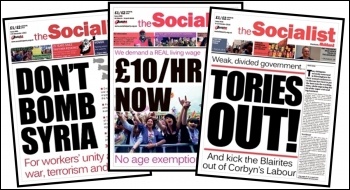 Below, working class fighters give a glimpse of why the Socialist is important to so many activists. The articles inside have helped guide them through the struggles they've helped lead. The Socialist is present at and supports every strike, protest and movement our supporters are able to reach.

In the last issue of the Socialist, we featured articles on the refugee crisis, the Spanish student strike and the Uber court victory. Who else gives space for migrants facing oppression but also organising against it to tell their own story? Which paper gave an eyewitness account of millions of school students striking in Spain? It was ignored by the establishment press. Where can you read a report of gig economy workers fighting back that is celebratory of their success while also clear that legal action alone is not enough? We said organising, campaigning and striking is the only way to win lasting improvements in conditions.

Can you help boost the readership of the Socialist? If you're a Socialist Party member, do you regularly discuss the paper in your branch meetings?

The Socialist isn't just written in an office; it's the tireless class fighters around the country who provide the material in this issue and every other. Anybody, whether you're a member of the Socialist Party or not, can write for us - tell us what you think, what your campaigning for, what's going on in your workplace, college or university.

If you're looking for inspiration for an exciting topic in a Socialist Party meeting, a Marxist discussion group, or just to talk to your friends and neighbours about, look no further than your latest issue of the Socialist.

Jeremy Corbyn has now won two landslide elections - showing the hunger for a party for the 99%. Over the summer, the Socialist had its highest sales for five years - every week clearly explaining how his anti-austerity policies can come to fruition.

The Socialist is a vital tool in the important struggles we're all facing - write for it, subscribe, sell it to others - and make sure you read it!

Why do you read the Socialist?

"In 2010, the Socialist supported the call for student strikes which was crucial in building a mass movement against the trebling of tuition fees. Now, with new fee hikes on the agenda, the Socialist is standing right beside student activists and supporting the United for Education demonstration on 19 November."

"After slaving away all day, working people - typified by the tenants on the Butterfields estate in Walthamstow - have little time or energy for what they call 'politics'. But the Socialist is different. It showed Butterfields campaigners that they were not alone, and that was important. All over the country - and indeed all over the world - working people like them are battling away on different issues and sometimes in different ways, but nevertheless all against the same inhumane system."

"The Wormwood scrubs branch and national POA owe a debt of gratitude to the Socialist paper. It has consistently covered our disputes and workplace news from the perspective of the rank-and-file member and not with the right-wing, union-hating spin tactics of the mainstream media. It has highlighted our struggles and rallied support when other media outlets would not touch us.

It is a vital tool for our members to discover and explore socialist ideas and keep informed about struggles throughout the trade union movement. Wormwood Scrubs POA is proud of our close relationship with the Socialist - long may it continue."

"The Socialist paper is a fantastic tool of international solidarity. It highlighted solidarity by Lisbon Dockers for the Welsh Museum workers, renewing their will to fight."

"Excellent coverage in this paper has highlighted our struggle to keep jobs and services local, and inspired and given confidence to our members!"

Marion Lloyd, PCS group president for the Department of Business, Innovation and Skills

"The Socialist newspaper has played an indispensable role in the development of effective, fighting strategies for workers at Whipps Cross hospital over the past 25 years. In the recent victory to secure permanent contracts, banishing zero-hour contracts and securing the London Living Wage for privatised workers throughout Bart's Trust hospitals, its record and guiding role was an important factor in ensuring a successful outcome to the union's campaign."

"The real strength of a socialist newspaper is in struggle. During the anti-poll tax campaign, Militant (the Socialist's predecessor) was invaluable in building the mass movement that took place. The reports, the legal guidance, and analysis was critical for the many thousands of people active in the campaign. It gave us invaluable confidence. It would be true to say that the battle against the poll tax would've been harder without a genuine socialist newspaper."

"The Socialist was a key to our victory. Without the incredible support raised via the paper we would have struggled to achieve the concessions made by management to protect our members."

"The paper has been amazing in supporting the protests against the unfair junior doctor contract, with many articles on the subject. Especially good have been those linking the protests to the wider struggle against austerity and calling for all healthcare unions to take coordinated strike action to save the NHS."

"The Socialist has carried articles on Jeremy Corbyn even since he declared his run for Labour leader. Each one has set out a clear strategy for how anti-austerity policies can win out against the right-wing."