Link to this page: https://www.socialistparty.org.uk/articles/23975

Up to 15,000 students, education workers and trade unionists marched through London on 19 November to protest against the Tories' latest attack on students - the Higher Education Bill. Socialist Students led the biggest, loudest and most vibrant bloc on the demo.

The HE bill, which is going through the House of Lords, will create a competitive market in the sector, open the door for 'for-profit' universities and allow the highest ranked institutions to raise tuition fees - which could mean an extra £250 (or up to £9,250) a year starting in September 2017. Some universities are already advertising fees above the current £9,000 maximum. 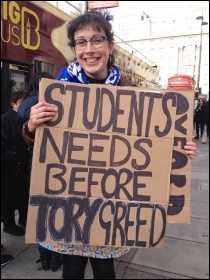 The National Union of Students (NUS) and University and College Union (UCU) called the demo to protest against the rise in fees and cuts. Socialist Students led the call for free education. We chanted: "Education should be free, not just for the bourgeoisie" and "Fight the power, change the system, what we need is socialism".

The point being not only to combat the Tories' latest attack, but to demand a radically different Higher Education system that is fairer for everyone: free education, living grants for all, the scrapping of student debt and no more cuts to education budgets.

This demo has to be the start of a sustained campaign. We should be making stronger links with the trade unions and learning from our student comrades in struggles across the world: the recent two million-strong Spanish student strike, and the South African students who marched on parliament and forced the ANC government to back down on a proposed tuition fees hike.

Manchester Socialist Students has called a meeting bringing together trade unionists, students, local activists and lecturers to discuss the next steps for the student movement, and would encourage other socialist student groups to do the same.

If we want to be successful we need to be coordinated, united and organised - to take this fight to the Tories and show them just how powerful we really are.

Such was the eagerness for socialist ideas that over 30 people applied to join the Socialist Party on the day. 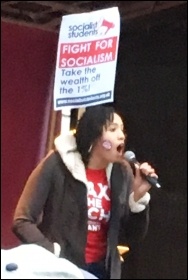 One of the speakers at the end rally was Darletta Scruggs from Socialist Alternative in Chicago, United States - co-thinkers of the England and Wales Socialist Party.

Darletta spoke of the need to fight the likes of Trump and May who represent the 'billionaire class', and to fight for socialism.

She told the crowd that Socialist Alternative had received a tremendous response from 40,000 people when it called 'Resist Trump' demonstrations across the US after Trump was declared the winner of the presidential election.

One of the speakers at the end rally was Darletta Scruggs from Socialist Alternative (US co-thinkers of the Socialist Party) in Chicago.

Darletta spoke of the need to fight the likes of Trump and May who represent the 'billionaire class', and to fight for socialism.

This version of this article was first posted on the Socialist Party website on 22 November 2016 and may vary slightly from the version subsequently printed in The Socialist.