Cash for rich and royals, cuts for the 99% - fight austerity 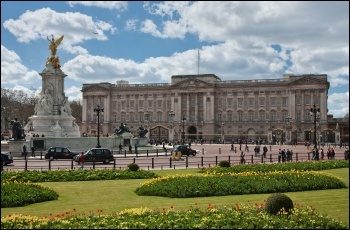 In a recent statement to the conference of bosses' organisation CBI, Theresa May reassured businesses she will rescue them from the "cliff edge". Yet, for millions of people facing the harsh realities of austerity Britain, there is no such rescue in the Autumn Statement.

With promises to ensure Britain has the lowest corporation tax rate in the G20, it's clear the interests of big business are safe. Likewise, they can find an extra £369 million pounds to renovate the most expensive council house in Britain, Buckingham Palace, at the taxpayer's expense.

Meanwhile, we queue at food banks, or wait glued to our phones at all hours in the hope of picking up shifts, because there's apparently no money.

At one London hospital this year, a psychiatric patient waited on an A&E trolley for 46 hours due to shortages. And how many struggling pensioners will make it through the winter with rising food and heating costs?

They can find money to give tax breaks to corporations, while ensuring our billionaire queen retains a life of extreme luxury. So why can't they find money to invest in secure jobs, our chronically underfunded NHS, or the desperate housing situation?

We don't need to accept this. The Tories are weak, and remain deeply divided over how to handle Brexit. With determined industrial action from trade unions, and a political fightback from Corbyn's Labour, we could see an end to this government, and an end to austerity.

For that to happen, we need to fight to make Labour a party fit to represent the working class - kick out the Blairites, and readmit all the socialists they have expelled.

A mass workers' party with a socialist programme could start to end this misery for the millions, and finish off this government of and for the millionaires.