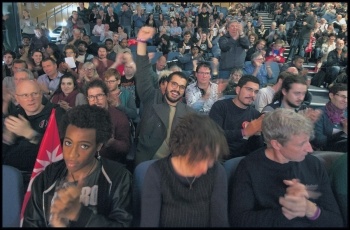 I can't stop thinking about Socialism 2016. It was the first time I attended and I was so impressed with the passion, strategy, knowledge and awareness of people's situations which was expressed by all the speakers and the response from members.

Organising such an event is a tall order and there was nothing that was left out - truly brilliant. I became a member of the Socialist Party straight away.

There were speakers from the USA, Spain and many more. They spoke of local successes as well as successes internationally. I was really blown away by their commitment and dynamic oration with a powerful movement for action and change.

The breakdown of capitalism is evident across the world. Polarisation of the rich and poor is at its most extreme as well as obscene.

Rates of pay are being significantly lowered, workers' rights are being attacked including using zero-hour contracts. The whole picture is one of poverty and crisis in a capitalist system which puts profit entirely before working people.

Everyone is suffering, which rightfully makes us angry. Anger turned to action is positive and effective.

The rich cannot hold their power forever in a world which knows how they operate. We can't take any more. We need to fight back.