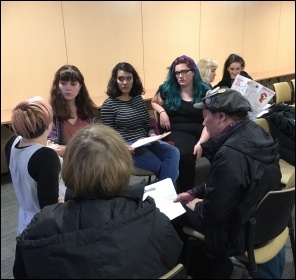 The discussion between Peter Taaffe and Michael Crick was well worth attending. It highlighted the incapacity or inability of mainstream capitalist media to understand and grasp the size and breadth of the global revolt against capitalism, from the USA to Greece, Ireland, Spain, and here in Britain.

After Donald Trump's election I needed something to lift the gloom and this weekend has done just that. A valuable experience with the added benefit of being thoroughly enjoyable.

Had a fantastic weekend at Socialism 2016. Highlights would have to be the sessions with Darletta Scruggs, Tony Mulhearn and Hugo Pierre. An event that doesn't fail to recharge the batteries for the battles ahead.

Socialism 2016 was more than inspiring. To listen and learn from the struggles and experiences of comrades all around the world, shows that the if we fight, we can win. Brilliant speeches and contributions throughout the weekend showed that socialists do not only talk the talk but walk the walk. And we will carry on in the streets and workplaces

It was electrifying to hear comrades from Spain - Juan Ignacio Ramos; the USA - Darletta Scruggs, Ireland - Paul Murphy, victorious Butterfields tenants, Tamil Solidarity activists, leading trade union fighters. All of these were and are at the forefront of our struggles against the attacks of capitalism and to build an alternative system that works for all - a socialist society.

When you see Paul Murphy speak at a massive rally, talking about the victories the workers have won in Ireland against water charges, in the Irish parliament representing working people, living on a workers' wage, being tried in court on false charges and facing prison for the crime of organising a movement and standing up for ordinary people, you know you are in the right party.

Great weekend at Socialism 2016. Great speakers with equally great contributions from the floor. The two rallies were superb.

Veterans of the great struggles of the working class of the Thatcher years (Liverpool and Poll Tax), American comrades talking about the resistance that is being organised against the presidency of Trump, Spanish comrades in Izquierda Revolucionaria... one word: wow!

At Socialism 2016 weekend many Socialist Party members wrote on the 'why I joined' wall about why they became members - here are some of the reasons:

Seeing pensioners queue for their savings when Northern Rock collapsed made me ask: "Can't it be better than this?"

Because I wanted to do something to change the world

To join the fight to put the capitalist system to bed

Because racism, sexism and homophobia cannot be defeated under capitalism

People before profit! Plan for people's needs first. Socialism is the only answer to all our problems

To fight environmental destruction and for nuclear disarmament

Because the Socialist Party defeated Thatcher and the Poll Tax

To place power back in the hands of ordinary people

Take the fight to the Tories (red and blue)

Hope, strategy and action. We are confident in our class, clear about our ideas and we don't just discuss but work to change the world

The most committed socialists and the best debates, the fieriest fighters for the working class