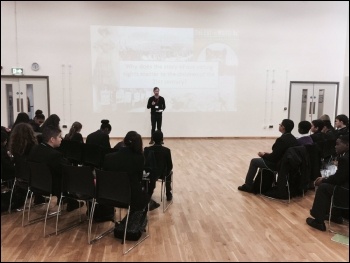 "I would like to vote, because I want a say in how my life is run and I know more than many who do!" This was one of the responses when I asked a room of 12-year-olds if they would like the right to vote.

On 11 November I had the privilege and pleasure to speak to two year 8 history classes at School 21 in Stratford, east London. I was invited to speak on behalf of the Socialist Party about Chartism, Suffragism and why their struggle for the vote is important today.

Chartism in particular, the world's first working class movement, I enjoyed learning about in school myself. And the parallels between then and now are huge.

Now most of Chartism's demands have been won. But having fought for pay for MPs so that not only the wealthy could afford to go to parliament, now practically all working class MPs have been absorbed by the capitalist class and its system.

The children asked many questions about politics today, including the US presidential election and about the historical struggle for the vote and changing the world.

I gave examples of what the Socialist Party stands for and why getting active and organised to fight for our rights is just as important as having the right to vote itself. The children are organising a re-enactment protest march around Newham soon which we have also been invited to participate in.