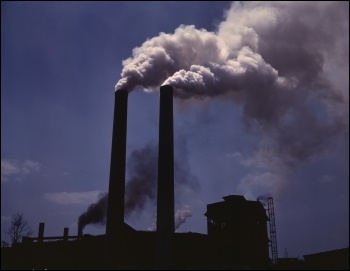 The latest United Nations-sponsored climate change conference has just ended in Morocco. This conference was a follow up event to the 'historic' agreement reached in Paris a year ago, that was intended to create a successor to the Kyoto Treaty that ended in 2012.

The main aim in Marrakesh was spun as being to build in a 'ratchet mechanism' to the Paris deal, so that the pledges made there (entirely self-determined) to control greenhouse gas emissions would get more ambitious over time as the review process got under way.

This certainly is needed, because even if all the commitments made in Paris were fulfilled, global temperatures would probably still rise by a disastrous 3°C. There was no agreement on this.

According to the European Union, one of the key deliverables was the Marrakech Action Proclamation, a call for the highest political commitment to be made to tackle climate change. In other words, more hot air.

The self-congratulatory mood at the conference was shattered by the news of the election of Trump, who has pledged to pull out of the entire process, calling global warming a 'hoax'.

Trump has appointed the notorious climate sceptic Myron Ebell to head his environment transition team. Ebell, from the Competitive Enterprise Institute, sent two of his cohorts over to Morocco to stage a stunt to ridicule the conference, which duly got them thrown out of the gathering.

The Paris agreement was designed to make it very hard for any country to pull out of the agreement, because it will entail four years of bureaucratic wrangling. Optimists in Marrakech were hoping that this would put Trump off, But he doesn't have to go to the trouble of pulling out, he can just ignore the Paris agreement.

This exposes one fundamental drawback with Paris - it was completely voluntary. There will be no sanction whatsoever if Trump decides to ignore the pledges that the US administration previously made. This will also apply to emission targets resulting from any future ratchet mechanism that is agreed.

None of the major emitters of greenhouse gasses would have signed up in Paris if the emission reduction commitments had to be legally binding. The other major powers, in particular China, will now be able to hide behind Trump and say, although they really wanted to cut emissions themselves, they will not be prepared to give the USA a 'free ride'.

Meanwhile, away from the farcical horse-trading at the UN, the climate situation is rapidly worsening. 2016 is set to become the hottest ever, and the concentration of carbon dioxide in the atmosphere, the main driver of global warming, has gone over 400 parts per million (ppm). When it reaches 450 ppm there will be a real danger that a tipping point will be reached and uncontrollable global warming will set in.

The UN-sponsored climate talks, going back for decades, have completely failed to tackle the threat we are facing, because none of the big capitalist powers that call the shots are willing to risk the profits of their own multinational corporations. Sweeping away the profit-driven capitalist economic system is the only way to break out of this spiral to environmental disaster.