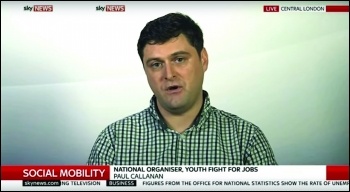 Should young people have to work for free to get into competitive professions like journalism?

Socialist Party member Paul Callanan debated this question on Sky News on 16 November. Opposite him was Sam Bowman of the Adam Smith Institute, a Thatcherite think-tank.

Bowman tried to downplay the extent and impact of unpaid internships, saying young workers should be grateful for the "experience".

Paul argued that all work should be paid. Unpaid internships exclude the working class, and offer no job security or quality of life to young people. They also undermine the number and conditions of paid positions. 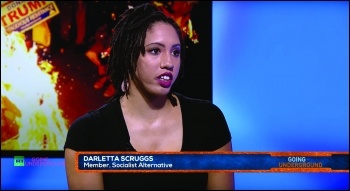 Can socialists organise to defeat the rise of Trumpism?

Darletta Scruggs of Socialist Alternative, US co-thinkers of the Socialist Party, appeared on RT's 'Going Underground' on 16 November.

Darletta acknowledged this is a frightening and difficult time for working class people. But it also shows that the US political establishment is in a deep crisis.

There are big opportunities for socialists to direct the huge anger in society in a constructive direction. What the US needs is a new, mass party of the 99% - with socialist policies. 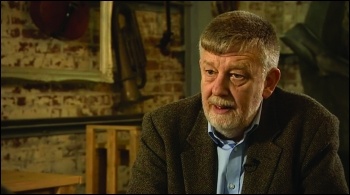 Dave Nellist on the Sunday Politics   (Click to enlarge)

Should Labour readmit the socialists it expelled for supporting Militant or being members of the Socialist Party?

Socialist Party member Dave Nellist, formerly a Militant-supporting Labour MP, spoke to the Sunday Politics on 20 November. He argued that Labour is changing - but that Jeremy Corbyn is outnumbered at the top of the party.

75 expelled socialists, including Dave, have applied to Labour for readmission. They want to support the battle to claim Labour for the working class. The Socialist Party calls for Labour to return to its inclusive, federal roots, and allow socialist groups to affiliate. 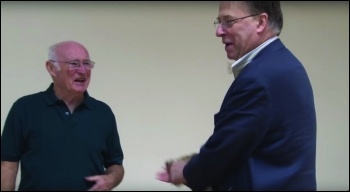 Peter Taaffe and Michael Crick at Socialism 2016   (Click to enlarge)