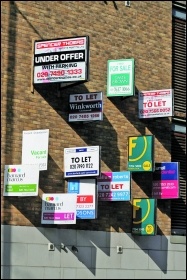 The Tories' 2016 Autumn Statement announced plans to ban letting agent fees in England - a move which young people and workers will surely welcome.

Resistance to Tory government and Labour council attacks on housing has been building for years - from the Focus E15 mums to the more recent victory on the Butterfields estate. Undoubtedly these campaigns have played a part in this decision.

But so has the weakness and unpopularity of the Tories in the aftermath of the Brexit vote. As housing campaigners and other groups such as the junior doctors have shown, the mood is turning against them.

Workers are getting organised, and the Tories see the danger of these pockets of resistance coming together to form a mass movement against austerity.

May calculates that a rhetorical shift towards populist policies could undercut this - and it is purely rhetorical. Both Philip Hammond, the present chancellor, and Theresa May, voted against a proposed law in 2014 that would have made letting agent fees illegal.

No date has been set for the abolition of letting agent fees. And there's been no mention of rent controls, or any other intervention to make renting affordable and stable. The Tories have no real intentions of improving the lives of workers.

But that's no reason to despair: we have the power to change that situation. This announcement shows the Tories are weak, and the wrangling over Brexit shows they are divided.

A united movement of workers and young people, including protests and strikes, could easily force them further back. With clear demands for rent controls and a mass programme of council house building - we can win!