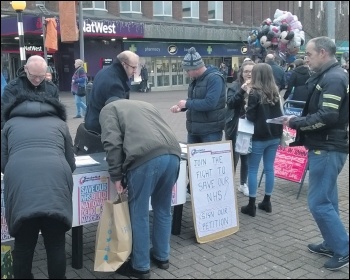 We sold 100 copies of the Socialist on our campaign stall in Hanley in just three hours on 26 November. We were building support for the 4 March 2017 national march to defend our NHS from privatisation.

We also raised £52 fighting fund to pay for more leaflets to advertise the march.

An 86 year old woman told us: "The Tories are killing our NHS, a big march is long overdue."

A nurse said: "It's a crime that, despite twenty odd years of gradual NHS privatisation, none of the unions representing us have organised a national march. Well done to the community campaigns for organising this march, have you booked a bus yet?"

We sold another 88 copies of the Socialist on two other campaign stalls in the same week and have already sold over 100 this week as well.

What does all this mean? There is a massive mood for real action to defend our NHS from being dismantled and privatised.