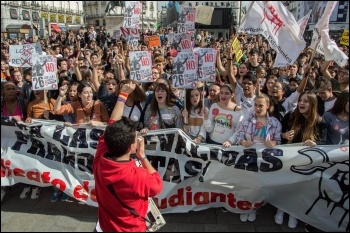 Following a meeting between the Ministry of Education and the representatives of the autonomous regions, the revalidas - proposed by Wert, the former education minister - have been abandoned. These reactionary matriculation exams were weighted to exclude working class students progressing to university.

The new agreement assures that simple completion of the Bachillerato (equivalent to 'A' Levels) will be treated in the same way as the PAU (university entrance exam).

The revalidas exams, which were to be sat at the end of the final year of secondary school as well as primary school, will no longer be obligatory and not have any academic bearing. The tests will merely be indicative. In other words they will only be introduced in some schools and as indicative tests.

This agreement means we have succeeded in defeating the Revalidas Franquistas and in so doing have prevented hundreds of thousands of youth from being thrown out of the classroom.

This victory is the fruit of a struggle conducted by millions of students over the last few years and is due in particular to the historic mass strikes of 24 October and 25 November called by the Sindicato de Estudiantes.

These strikes emptied the classrooms and filled the streets in protest against these unjust and reactionary exams. The victory was also achieved by the battle fought by parents and teachers alongside us - although some might be tempted to claim victory themselves - such as those from PSOE (the social democratic party) who supported the formation of the new government of Mariano Rajoy.

In reality the only reason the right-wing PP government gave in on this issue of strategic importance to them was due to the mobilisations and struggles on the streets.

This is the first victory. Now the battle continues with the aim of finishing off the LOMCE (education reform) and ensuring that not one comma of this Francoist counter-reform remains.

We told the government and their cronies - Cuidadanos (right-wing Citizens party) and leaders of PSOE - that we are aware of the significance of this victory. We will not allow them to continue down the road of cuts and attacks on state education with their latest manoeuvres in the form of the 'Education Pact'.

We told them that they would not cheat us and that there would be no pact should they refuse to recognise and implement the demands of those millions who have tirelessly struggled as part of the 'Green Surge' (Marea Verde, a campaign involving education workers against cuts).

Their demands are: the return of 7,000 million euros stolen from the state education budget; the re-employment of 32,000 sacked teachers; the repeal of the LOMCE and the 3+2 exams; no more state funds to support religious and private education.

Furthermore if they decide to follow the road that they have taken in the last few years, they should be aware: We will again take to the streets.