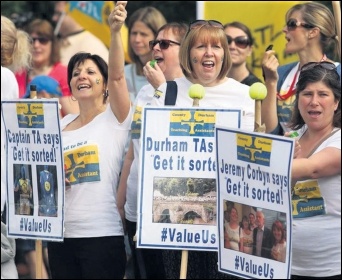 Durham teaching assistants (TAs) have won a significant battle in their campaign to prevent Labour-controlled Durham council from cutting their pay by up to 23%. The immediate threat to dismiss all TAs, members of Unison and teaching union ATL, and reemploy them on worse conditions from 1 January 2017 has been suspended.

Four days of strike action have forced the council back to the negotiating table.

Unison called off the next round of planned strikes, due to commence on 1 December.

The council will now re-enter negotiations with the recognised trade unions to try to find a settlement by a new deadline of 1 September 2017.

Staff are jubilant about their victory, but very cautious too that the threat of pay cuts has not been lifted.

The council has laid down its conditions that it is undertaking "a review of teaching assistants' role, function, job description, and activities within the breadth of school activities to establish whether current job descriptions adequately describe the role being undertaken by TAs in schools. This review will not reopen the single status agreement currently in place."

Such a review is likely to lead to winners and losers. Possibly some new higher graded posts will be introduced and staff will be divided as they compete for these 'promotions'.

There is something seriously wrong with Durham council's pay and grading structure for TAs. They earn thousands of pounds less than those in neighbouring authorities, even before the current attack on their pay.

One of the reasons TAs remained employed on full-time contracts was to compensate them for such a low grade delivered through job evaluation for single status.

There must be recognition that job evaluation (single status) must be reopened. Both the unions and management must admit that they got it wrong. All the TAs should be re-graded up to a level commensurate with other authorities and no one should lose any pay.

Durham TAs have to stay vigilant and engage in the running of their union to ensure no sell out.