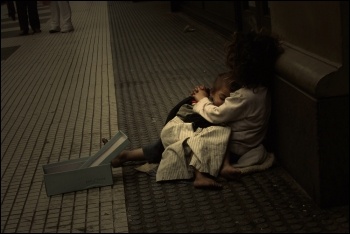 Homelessness in the UK has reached epidemic proportions, 120,000 children will be homeless this Christmas, two million people are waiting for social housing and a cap on benefits has added to the 60,000 evictions a year. There has been no response from government except inane ramblings such as 'difficult decisions must be made' and 'we're all in this together'.

Homelessness in Doncaster is no worse than other towns but a few enterprising folk have set up a tent city to protect the town's homeless.

An appeal went out through social media and the community has responded magnificently. Tents, camp-beds, blankets, clothes, food and toiletries have all been donated. Someone even paid for a couple of toilets to be hired.

Within a very short time people volunteered themselves to staff the 'city' which has been set up on a piece of public land in between the council's prestigious offices and the town centre.

It's a huge embarrassment to the Labour councillors who have cut £100 million from services in the past three years and are planning a further £68 million for the next three years. This is a council that has increased its useable reserves from £97 million to £104 million while making these vicious cuts to essential services for the most vulnerable.

It's time Labour councils started fighting back and demanding the resources they need to look after the people who voted them in instead of appeasing this weak Tory government.

It's time Jeremy Corbyn stood by his opposition to cuts and organised a real fightback.