Link to this page: https://www.socialistparty.org.uk/articles/24118 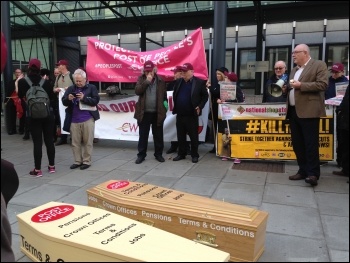 Up to 3,500 Communication Workers Union (CWU) members across 300 Post Offices will take five days of strike action next week. This will include three days in the Crown Post Offices, which handle around 20% of total daily Post Office traffic.

The CWU leadership had offered to suspend the strike in exchange for a suspension of the company's Post Office closure and franchising scheme to allow negotiations to take place. The company's refusal indicates that it is prepared to carry on with the scheme and it is right that this is met with industrial action.

The scheme is an attack on job security and pensions in a programme of cuts which includes a further 2,000 job losses, the loss of thousands of pounds in retirement pay and the ultimate privatisation of 'flagship branches'.

The Post Office is continuing to attack the network and supply chain and in closing down the pension scheme the Post Office is effectively stealing money workers have built up over many years of service. This is despite there being a surplus of over £130 million - making it one of the best funded pension schemes in the country!

In attempts to defeat the first strikes, the Post Office offered staff money not to go on strike, highlighting the desperation to achieve the savings.

With similar cuts being made across Royal Mail there is a desperate need for the CWU to be robust in its negotiations, protecting all terms and conditions for our colleagues. This should include wide-ranging changes which would benefit members, such as demanding the company look into expanding the services, such as the creation of a PostBank similar to Post Offices in other countries, and securing existing jobs and creating new ones.

Coordinated action in defence of jobs, pay and terms and conditions right across the industry is needed and this should be linked up with other unions and workers working in the courier companies, many of whom now face precarious and exploitative employment.

The National Shop Stewards Network (NSSN), to which the CWU is affiliated and of which I am a member of the Steering Committee, at a rally and lobby of the TUC Conference in September called on delegates (including from the CWU) to demand such action be coordinated right across the union movement. But until then we must support Post Office workers in their action.

More details can be found at the CWU's People's Post campaign.

This version of this article was first posted on the Socialist Party website on 16 December 2016 and may vary slightly from the version subsequently printed in The Socialist.