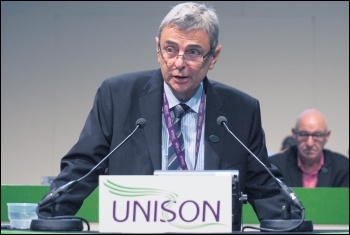 The union had hoped to silence the anger of the members. Unfortunately for them the three left of Prentis candidates weren't going to let them off that easily and now a court will determine if the election was free and fair and if it should be re-run.

In the face of overwhelming evidence, the union is not disputing the key facts. Instead they are accepting that there was some rule breaking, but claiming that this was by a lone "rogue" official - London regional secretary Linda Perks. They claim that once they had found out about the tape of the London meeting, they took action against her (she was initially suspended and then given a final written warning and transfer).

As such, the union wasn't liable for her actions. In addition the problems were contained to London, and such was the margin of Prentis' victory that even if his London vote was discounted, he would have still won. After three days of the hearing on 19-21 December, the outcome is an open question.

At one point she asked a national union official, pointing out that in the tape the regional secretary was instructing staff to lie, "wouldn't this normally result in summary dismissal?" The officer being questioned had no option but to agree.

What also came out in the hearing was the extent of the involvement of senior national officials in 'Team Dave' (his campaign team).

The judge was also clearly unhappy that when a complainant raised that this was a breach of the rules, he was served with a lawyer's letter threatening him with libel by Prentis, seeing this as an attempt to silence complaints.

Whatever the outcome of the case, it won't be good for the union leadership. They could be forced to re-run the election, and/or initiate further action against other officials in London.

Through the newly-formed Unison Action group, we must assemble slates of candidates for this year's NEC elections to ensure that an anti-Prentis majority is elected.