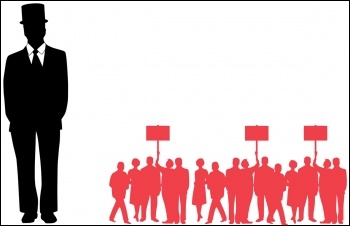 While outlining many of the deep inequalities we are facing, she fails to provide any solutions. In fact, the problems she rails against are direct consequences of Tory policy.

She weeps crocodile tears over the fact that if you are poor in Britain you are likely to die "nine years earlier than others," that "if you're a white, working class boy, you're less likely than anybody else in Britain to go to university" and that it's now "harder than ever before to own your own home."

Does our prime minister think we are oblivious to her party's vicious austerity programme and free-market policies that have made millions poorer?

Have students forgotten that it was the Tory-Lib Dem coalition that raised tuition fees to £9,000, pricing many working class people out of higher education?

And which government is it again that has allowed house prices and rents to rise exponentially, while only one council home is built for every 30 people on the waiting list? The hypocrisy is astounding.

The Socialist Party campaigns to use the vast wealth, currently in the clutches of the 1%, for the benefit of the majority.

Through public ownership of the biggest companies under democratic working class control, resources could be planned to bring millions out of poverty wages and insecure work.

The NHS, education and public services could be fully funded, and a programme of mass council house building embarked upon.

If Corbyn's Labour put forward decisive policies like this, would May get away with treating us like idiots by claiming she stands against inequality, for a "shared society"?

Let's build a party by and for the working class, that stands resolutely in working class interests - against those of big business and their puppets in parliament.