Some of the Socialist Party members who attended the national women's meeting, 7.1.17, photo by Sarah Wrack   (Click to enlarge) 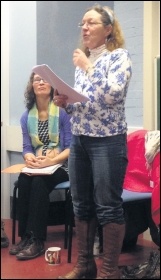 Beginning with an important talk on the pivotal role of women in the Russian revolution and the lessons we can learn from this 100 years on, 50 Socialist Party members from around the country attended a national women's meeting in London on 7 January.

The revolution was triggered by a demonstration of women textile workers, and it transformed women's lives - freeing them from the drudgery of endless domestic work with communal restaurants, laundrettes and accessible childcare. Abortion and divorce rights allowed women to participate fully in society. 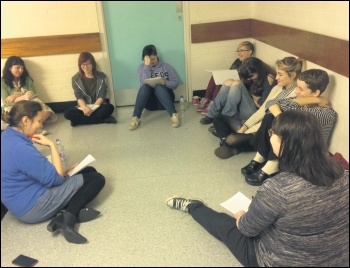 One of the workshops at the Socialist Party national women's meeting, 7.1.17, photo by Sarah Wrack   (Click to enlarge)

This was only made possible by a feminist movement that unified women in struggle on a class basis, recognising the fundamental cause of their oppression as the divisive capitalist system. Unfortunately most of these gains were undone under Stalinism.

There were also discussions on how we can encourage women to take leading roles within trade unions, in the student movement and in community campaigns.

The final session of the day, on abortion rights under attack and the fightback across the world, highlighted the growing radicalisation of women by movements for reproductive freedom. 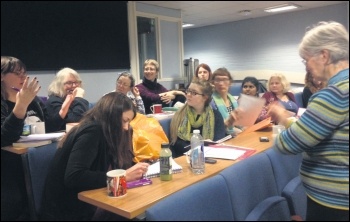 In Poland up to 140,000 marched in response to restrictive abortion laws, and in Ireland the campaign demanding the repeal of the Eighth Amendment - which the Socialist Party's sister organisation is playing an important role in - continues to grow.

Even in the UK, 50 years after the Abortion Act, NHS cuts seriously undermine abortion access. It is essential to continue the struggle for these basic rights and link up struggles internationally.

In the current political turmoil capitalism has shown it is increasingly incapable of providing even the most basic rights for women across the globe. Fundamentally, socialism is the only way forward for women's emancipation. 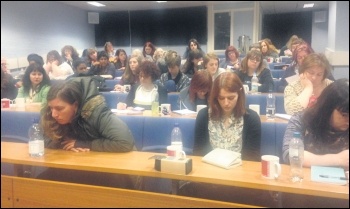