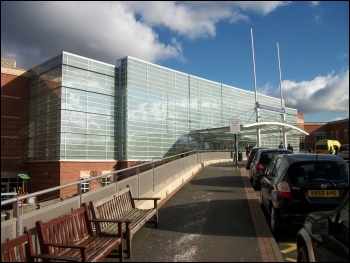 Worcestershire Royal Hospital has been at the centre of the winter NHS crisis following several deaths, photo by Mr M Evison (Creative Commons)   (Click to enlarge)

One patient died of a cardiac arrest after waiting 38 hours for a ward bed. The other patient, who suffered an aneurysm, was taken to the resuscitation area but sadly died.

Both these deaths happened in the A&E department of The Royal.

Also at the same time, a third death took place at the hospital. Unfortunately this death was a suicide by hanging.

During this period in other parts of Worcestershire, it was decided to temporarily close four minor injuries units so that nurses could be relocated to the A&E departments of Redditch and Worcestershire hospitals. At this time of year A&Es up and down the UK are usually stretched to bursting.

Worcestershire Acute Hospital Trust has confirmed the three deaths are currently being investigated and Worcester's Tory MP, Robin Walker, is supposedly pushing for an emergency meeting with Health Secretary Jeremy Hunt to discuss the dire situation. The extra strain on the Worcestershire in general is also due to the fact that some services have been cut by the Tories in other hospitals in the county, including Kidderminster and Redditch.

As the national news reported the deaths, Worcestershire Socialist Party ran a 'Save our NHS' stall. We collected many signatures and had some interesting discussions with local shoppers, also making them aware of the 4 March national demo to save the NHS.