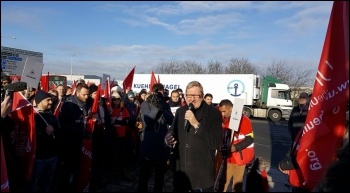 In the upcoming Unite the Union elections the Socialist Party is supporting Len McCluskey for general secretary. Under Len's leadership, the union has taken a more militant stance with a whole number of disputes.

Gerard Coyne, the union's West Midlands regional secretary has announced that he will challenge Len McCluskey.

For the Socialist Party, this election is a fundamental clash about the political and industrial strategy of the biggest union in the country. Coyne is the candidate of the Blairites and behind them the capitalist establishment, who see the election as an opportunity to strike a blow, not just against Len McCluskey but also Jeremy Corbyn in Labour.

In the executive elections that take place at the same time, four Socialist Party members are running on the United Left slate.

Suzanne Muna has been on the executive since 2015 and is again standing for one of the London and Eastern territorial seats.

Housing worker Suzanne, secretary of the Unite housing workers branch, says: "I have been an active trade unionist for over a decade, leading several successful strikes. I have also led a branch actively resisting attacks on pay and working conditions for housing workers.

"During my first executive term, I have highlighted the housing crisis and supported members in all sectors demanding higher wages and better conditions."

Jamie Cocozza, a branch secretary representing workers in passenger transport is on the list for Scotland.

Nominations are from 16 January - 17 February and voting is between 27 March - 19 April. See unitedleft.org.uk for full slate.