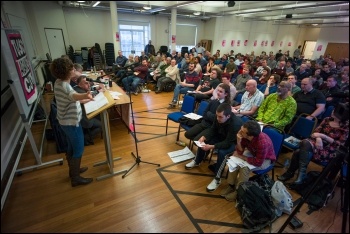 Hannah Sell moving the Socialist Party's motion to stand against Blairites at the 2017 TUSC conference, photo by Paul Mattsson   (Click to enlarge)

The Trade Unionist and Socialist Coalition (TUSC) met in conference on 28 January to discuss how it should operate in a political context shaped by Jeremy Corbyn's leadership of the Labour Party. The conference included a debate on whether or not to stand candidates in the 2017 local elections, overwhelmingly agreeing a motion (see below) for the national steering committee to proceed with processing candidate applications.

TUSC warmly welcomed Jeremy Corbyn's Labour leadership election triumphs in September 2015 and again last year, with the constituent parts of the coalition contributing to his victories.

Paul Reilly, RMT transport union executive member, in the opening address to the conference, pointed out that the 80,000-strong transport union was the second-biggest donor to Jeremy's leadership campaigns, behind only the 1.4 million-member Unite union.

Significantly, as a politically independent union, the RMT was able to contribute more than the Labour-affiliated rail unions, Aslef and TSSA, whose £100,000-plus annual affiliation fees actually help to finance the anti-Corbyn, right wing-controlled Labour apparatus.

The RMT will back Jeremy Corbyn, said Paul, but will also keep to its annual delegate general meeting decision to continue supporting individual candidates in elections, TUSC or Labour, who "support the union's key policies. We back candidates that back us."

All the conference speakers started from a determination not to undermine Jeremy Corbyn's leadership or the anti-austerity struggle that lay behind his victories. On the contrary there was agreement that building the struggle is the only way that his leadership can be sustained against the Labour right wing.

But the right are particularly entrenched among Labour's elected representatives, in parliament and the council chambers. So what should be done when the 'Labour' candidate on the ballot paper is a jobs and services-cutting, anti-Corbyn, right-winger?

There are, for example, 210 Labour councillors up for election in May who were among the 1,000 councillors who signed the open letter in support of Owen Smith in last summer's leadership coup against Jeremy Corbyn. Where it is possible to stand a TUSC candidate against them in May, should they really be given a free run?

Hannah Sell, moving the successful resolution on behalf of the Socialist Party, said that the key was to recognise that Labour was "two parties in one".

There are those inspired by Jeremy Corbyn's anti-austerity message, particularly the thousands of new joiners, who would respond to a clear call to transform the Labour Party from Blair's 'New Labour' into a real socialist anti-austerity workers' party.

On the other hand there remains the right wing, representing the interests of the capitalist establishment who benefitted so much from Blairism, who will fight to the end to prevent this. Where the right stand as councillors, implementing draconian cuts to local public services, a ballot box challenge would strengthen the struggle against them not undermine it.

This wasn't accepted by Charlie Kimber, speaking for the third TUSC constituent organisation, the Socialist Workers' Party (SWP), who opposed the resolution. Standing candidates at this time in England and Wales - "Scotland is different" - would only "weld together" Corbyn supporters with the right wing and it was necessary instead to allow events to develop to drive "the two trends apart".

Another SWP member, Simon Hester, speaking from the floor, appealed to the conference to "have patience" and not "jump the gun" by standing candidates this year.

This wasn't a call for "passivity", argued the SWP speakers. "All of us here spend more of our time campaigning, supporting strikes, and organising demonstrations than we do running election campaigns," said Charlie Kimber.

But as the Swansea RMT branch secretary Owen Herbert said from the floor, "campaigning is vital but working class people want to have a say at the ballot box as well." If they are not represented by Labour - and they won't be by the right wing who still dominate the Welsh Labour Party - they will look elsewhere, including to Ukip. "Show me a socialist Labour Party and I'll affiliate to it. But TUSC must carry on standing candidates until we have a Labour Party that can really represent us."

The danger is that leaving a vacuum 'welds together' working class voters, angry at their local Labour council's cuts, with other political forces - Ukip, the Greens, and even reviving the Liberal Democrats. This was a theme of several speakers from the floor.

It was recognised that TUSC couldn't fill the vacuum, even partially, in every electoral contest - in a parliamentary by-election for example, where national factors would dominate. The motion was not saying, 'stand everywhere'. But working class voters can easily distinguish between Jeremy Corbyn and a local right-wing councillor cutting libraries, children's centres, bin collections and other vital local services. So why give up one of our campaign tools - the threat of a ballot box challenge?

PCS vice-president John McInally, who sits on the TUSC steering committee in a personal capacity, agreed that the political context in Scotland was different, with Labour still in crisis. Working class support for the Scottish National Party (SNP) is beginning to erode. It is therefore right to support the aim set by the autonomously organised Scottish TUSC to stand as widely as they can in this year's Scottish council elections.

"Scotland is a different country", he said, turning to Charlie Kimber, "but not a different planet. Council workers, like the Durham teaching assistants facing pay cuts from a Labour council, need political representation as much as council workers facing cuts in Glasgow or Dundee do."

Other points of contention came up in the debate. RMT and Socialist Party member Jared Wood asked the question, "what worries Jeremy Corbyn the most? Is it TUSC candidates getting votes for socialist anti-austerity policies against Labour right-wingers in some council seats?

"Or is it Len McCluskey losing the Unite general secretary election to the right-wing candidate Gerard Coyne, who will then move to unseat Corbyn? Isn't that the election the SWP should be more 'tactical' about, if they want to defend Jeremy Corbyn, and not back an alternative left candidate against Len McCluskey as they are doing?"

While not hiding our differences with Len McCluskey the Socialist Party is supporting him in the Unite election. As Rob Williams told the conference, "the Unite election is not a 'referendum' on Corbyn," as the SWP claimed the council elections were. "If Coyne wins it will be a coup against Corbyn, and we know whose side we are on."

In his reply Charlie Kimber referred back to a Socialist Party statement that had been submitted to the TUSC national steering committee last autumn, calling on TUSC to "make no further preparations for contesting the May 2017 elections in England and Wales pending discussions with Jeremy Corbyn and his supporters on the new possibilities opening up following his re-election victory." What has really changed since then to reverse that position, he asked?

But things have moved on, responded Hannah Sell, since the Socialist Party circulated its statement to the steering committee, the day after Jeremy Corbyn's re-election (see '#CorbynWins: New tasks for TUSC'

The momentum generated by his second victory, which could have been built on to decisively defeat the right and transform the Labour Party, has been dissipated. While there could be another Corbyn wave in the future, it is clear that the 'new possibilities' the statement referred to have not been seized.

Jeremy Corbyn is attempting the impossible, said the RMT national president, Sean Hoyle, summing up. "He can't keep his socialist principles intact and the Labour Party intact at the same time. The vast majority of the parliamentary Labour Party and the councillors who back them are not socialists and shouldn't be left unchallenged by socialists, including at the ballot box."

TUSC and the 2017 elections

The following motion was agreed by the conference, with five votes against:

This conference re-affirms the support that TUSC has given to Jeremy Corbyn against Labour's Blairite right-wing, from his initial leadership election victory in September 2015 and during his re-election campaign in 2016.

We recognise that his leadership of the Labour Party has opened up the political situation compared to the first five years of TUSC's existence and that his defeat by the Labour right-wing would be a serious blow for the working class movement.

TUSC was set-up in 2010, co-founded by the late Bob Crow, to enable trade unionists, community campaigners and socialists to stand candidates under a common anti-austerity and socialist banner, with an agreed minimum platform of core policies.

Establishing an electoral coalition of this character, involving a mix of constituent organisations and individuals, was conceived as a step towards solving the vacuum of working class political representation that had existed since the triumph of 'New Labour'.

Clearly Jeremy Corbyn's leadership victory, potentially a terminal defeat of New Labour, required TUSC to re-calibrate its electoral activity and conference supports the steps taken by the steering committee to do so.

In the May 2016 local elections, for example, no TUSC candidates were even considered to be run without local TUSC groups seeking a dialogue with the sitting Labour councillor or prospective candidate on the critical issue of their preparedness to resist cuts to local council jobs and services.

Conference calls on the steering committee to continue with this approach for the 2017 elections.

We recognise that this will be more challenging in the 33 English county councils and unitary authorities with elections in May, only six of which have Labour-led administrations.

That is not the case, however, in Wales - where right-wing Labour is the dominant force in local government - or Scotland, in a different political context and with councillors elected under a proportional representation system in multi-member wards.

The preference vote system used in mayoral elections also makes it easier for TUSC candidacies to be supportive of Jeremy Corbyn's anti-austerity message while making sure that the Tories do not make electoral headway.

Notwithstanding the differences between the various contests taking place in May, conference calls on the steering committee to ensure that, for whichever elections candidate applications are received, TUSC's electoral interventions are part of a serious campaign against cuts to local public services and will strengthen the battle against the right wing in the Labour Party and the unions.