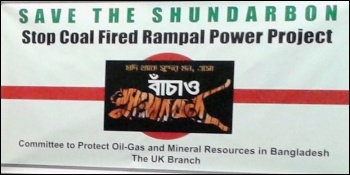 Committee to Protect Oil, Gas and Mineral Resources in Bangladesh campaigning to stop the Rampal project   (Click to enlarge: opens in new window)

A half-day hartal, or general stoppage, took place in Bangladesh on 26 January. It was part of an ongoing campaign of protests against the Rampal coal-fired power plant project which threatens the livelihoods of 50 million rural poor in this country.

The Rampal power station project will potentially destroy the world heritage Sundarbans mangrove forests with devastating consequences for the region.

In the capital, Dhaka, police attacked demonstrators – including reportedly ordering a bus driver to plough into protesters. Campaign organisers (National Committee to Protect Oil-Gas-Mineral Resources, Power and Ports) responded to this assault by calling for demonstrations on 28 January and a countrywide sit-in on 25 February. It will also hold a mass rally in Khulna on 11 March.

Bangladesh is a country with a militant tradition of struggle. Last December, tens of thousands of garment workers in Dhaka came out in a week-long strike. They were demanding a minimum monthly wage of 15,000 taka (£158) – a 300% increase on the current minimum wage.