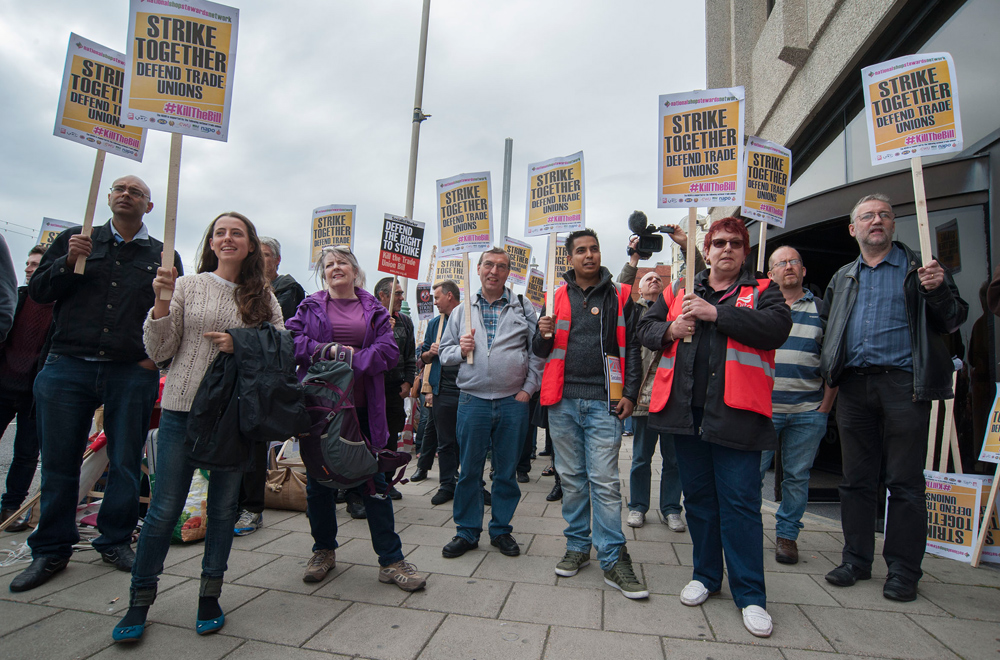 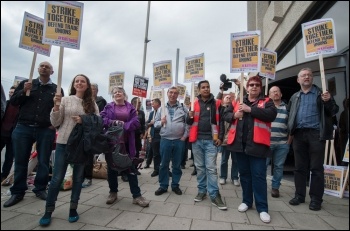 The National Shop Stewards Network’s ‘Kill the Bill’ lobby of the TUC in 2015, photo Paul Mattsson   (Click to enlarge: opens in new window)

The Tories have confirmed that their anti-union laws, including new undemocratic industrial action ballot thresholds, will come into force on 1 March. John McInally, Socialist Party member and national vice-president of the civil servants’ union PCS (personal capacity) looks at how the Trade Union Congress (TUC) reacted to the trade union laws and what comes next.

Certain areas of the NHS have been declared a humanitarian disaster. There is an attempt to smash the RMT trade union on Southern Rail. There are zero-hour contracts, attacks on terms and conditions in the civil service, the wholesale destruction of public services and continued pay freezes for NHS and public sector workers. There are plenty of issues to mobilise workers.

So it is little wonder that workers are asking the question: what is the TUC actually for? That is a question for some union leaderships too – those who accept the status quo, who see no alternative to austerity and are tied into the idea of concession bargaining.

The full-scale privatisation of the NHS is on the cards and there has not been one day of generalised action to stop that. A national NHS demonstration has been called by the rank and file on 4 March while the biggest health union, Unison, has told its London activists not to discuss it.

As for the Trade Union Act itself, the TUC barely lifted a finger to stop the bill becoming law. For example, they organised a rally at Westminster but didn’t book enough seats, meaning hundreds of trade unionists never managed to get into the hall.

The campaign was centred on ‘I heart unions’- type propaganda instead of explaining to trade union members the implications of the new trade union laws, not just about human rights but in relation to pay, terms and conditions.

This is in contrast to what happened in the 1970s when Tory prime minister Ted Heath tried to implement his own trade union bill which was met with mass resistance, including a TUC-organised special conference, national days of unofficial action and a national demonstration of 250,000 workers. The bill was defeated.

Now we need to make the RMT motion at TUC conference in 2016 a reality. It called on the TUC “to convene an urgent conference of affiliates to provide a practical forum, including workshops, as to how to best coordinate our legal and industrial response to the act.”

As this says, we can’t just accept the act and do nothing about it. We need to continue the battle to get the anti-trade union laws scrapped. We need an industrial and political strategy because where struggles are taking place they are individual instead of coordinated struggles.

It’s a lack of action and lack of strategy that gives the current, weak Tory government the confidence to press forward.

The TUC should be coordinating the anger and struggles taking place across the country instead of stepping back and giving the Tories a free hand.

There is mass discontent at the present time, industrially and also seen in the protests taking place against Donald Trump, and the TUC and individual unions have a responsibility to take a lead in organising this discontent.