From The Socialist newspaper, 2 February 2017 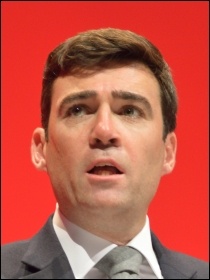 Greater Manchester metro mayor: How will you fight cuts?

The new metro mayors being elected in May have been hailed by some Labour politicians as a new opportunity to defend public services from the Tory government. However, on the basis of the DevoManc deal, held up as the most 'advanced', to oppose austerity would mean a mass struggle by ordinary people across Greater Manchester for more resources for the region. If this route is not taken, devolution will inevitably lead to cutbacks.

For healthcare, it is a tightly-centralised smashing up of what remains of our NHS and any structures we can influence locally. As part of "Healthier Together" plans, six of the ten hospitals in Greater Manchester will be downgraded - a potential step to their closure.

The £300 million pot of money to build houses in Greater Manchester can only be used to loan to private developers and cannot be spent on council or social housing. Education Area Reviews mean the closure and mergers of colleges across the region.

This atrocious deal was cooked up between George Osborne, Tory chancellor at the time, and the ten council leaders in Greater Manchester, nine of whom are Labour. Jeremy Corbyn-supporting Salford MP Rebecca Long-Bailey has correctly stated, in meetings, that DevoManc is just about "devolving responsibility for the cuts".

Burnham has correctly identified that the Brexit vote, with the majority of Greater Manchester voting 'leave', reflected a deep seated anger with the political establishment and has promised to stand up against Westminster. He is holding 'our manifesto' events, engaging with local people about what they want to see in his manifesto. He has promised to continue to pay student nurse bursaries, donate 15% of his salary to a fund to tackle homelessness, oppose fracking and build council housing.

The Socialist Party supports these pledges as a step in the right direction. But, we would ask Andy Burnham, how are these to be implemented? For example, much of the money for housing has already been allocated to the likes of Peel Holdings for luxury flats. To use the money to build council housing on a mass scale, as is needed, will require taking on these companies and their political supporters.

Health and social care faces upwards of a £1 billion shortfall after massive cuts are carried out through the 'Sustainability and Transformation Plans'. The decision to oppose fracking by neighbouring Lancashire County Council has been overturned by central government.

Burnham's pledges could be implemented. However, they would require mobilisation of local communities and trade unions into a mass campaign to force the government to provide the funds that are needed, as well as changing parts of the Devo deal itself.

Andy Burnham is not prepared to wage such a struggle. He is not standing on a fighting programme of demanding more money to provide decent public services in Greater Manchester. He didn't take part in the Blairite coup against Jeremy Corbyn, but he didn't support him in the Labour leadership election either. And in 2015, he stood against Corbyn in the first leadership election.

His record over years in New Labour show his real politics, such as voting for the Iraq war. While he was Health Minister, privatisation of Hinchingbrooke hospital began and he argued that the NHS should just be the "preferred provider" in tendering contracts. 'Independent sector treatment centres', run by private companies, increased under his watch. At Trafford General Hospital the treatment centre was run by Netcare that was paid £26 million for operations it didn't carry out. He said in 2007 that PFI contracts were "the right schemes and offer value for money."

Workers and community activists in Greater Manchester need to put the maximum amount of pressure on Burnham and push for genuine anti-austerity policies. Burnham has said that he will not let the other boroughs be "left out in the cold by a Manchester city centric administration" but the logic of the Devo deal will do exactly that unless there is a democratic plan to ensure funding goes where it is needed. For example, nearly a third of the housing fund (£70 million) has been loaned to Ask Real Estate and Carillion to build a skyscraper in Manchester city centre!

For the last six years of Tory government, Labour councils have been implementing austerity across Greater Manchester that has had a devastating impact on our services and jobs. We have consistently called on Labour councillors to defy the Tories and set 'no-cuts' budgets and use reserves and prudential borrowing powers to buy time to build a broad-based campaign to stop the cuts for good.

Many Labour councillors have opposed Jeremy Corbyn and his anti-austerity politics in the Labour Party. Blairite councillors will try to block a metro-mayor trying to reverse privatisation and fighting for more money for local services, which highlights the need to build a mass campaign of ordinary people across the region.

Greater Manchester supporters of the Trade Unionist and Socialist Coalition (TUSC) - an electoral alliance including transport union RMT and the Socialist Party - can't consider fielding a candidate in this election, due to being priced out. The deposit alone is £5,000, with thousands of pounds extra needed for a page in the official electoral booklet, sent to every house in the area. However, we will not be silent during the election and afterwards. We will be continuing to campaign for socialist measures to fight austerity in Greater Manchester. We call on people locally to join with us in defending public services and for genuine devolution and democracy in our region.

Note: The Socialist published a shorter version of this article