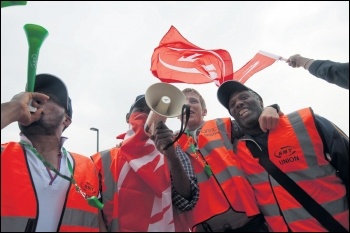 A strike by 3,500 station staff brought the tube network to a standstill on 9 January. The strike showed that station staff could be as powerful as train operators. It was a game changing strike, showing clearly that RMT is able to close the network without the support of the drivers' union Aslef.

Transport union TSSA also took action, although only after the leadership had attempted to pull out at the last moment. To their credit, TSSA local reps rebelled and the attempted retreat was cut off. At that time only 200 jobs had been guaranteed by London Underground and there was no movement on making the newly created 'CSA2' grade into properly trained 'CSA1s' who are paid £8,000 more.

Immediately following the strike TSSA stated that it would not be naming further strike action and it agreed to enter into a review as London Underground had proposed before the strike.

In contrast, RMT followed up the strike on 9 January by announcing action for the second week of February, which would have severely hit services for four days.

Management were forced to make an improved proposal. 200 additional jobs became 325, meaning that 533 out of 953 jobs initially cut have been saved as a result of two disputes over three years.

All staff in the CSA2 grade already on the job will get a CSA1 position and the higher salary once they have completed 12 months employment. Further talks will take place with a view to allowing all CSA2s employed in the future to become CSA1 within 12 months of starting.

Recognising the massive progress made, RMT suspended the strike action and overtime ban. RMT will continue to stand by the principle that all jobs should come back and that the all CSA2s should be upgraded into CSA1 positions.

The union will build a political campaign, alongside our industrial fightback, to seek the restoration of the government subsidy for the tube network. It is the withdrawal of the subsidy that lies behind London Underground's austerity drive.

If the TUC organised a public sector general strike instead of making dodgy deals to undercut RMT membership on Southern Rail, we would be able to beat the government back. A coordinated response from the TUC could stop austerity in its tracks.