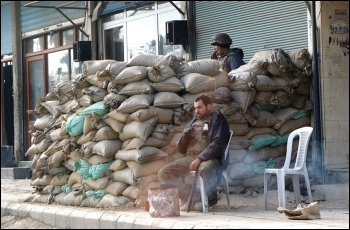 Six years of war have killed hundreds of thousands, and reduced Syria to rubble, photo by Elizabeth Arrott (Creative Commons)   (Click to enlarge)

Following the revolutionary uprisings in Tunisia and Egypt in 2011, Syria was witness to a mass popular revolt against the brutal and corrupt dictatorship of Bashar al-Assad. The counter-revolutionary responses to that uprising started a chain of tragedies that unfold in Syria today.

The absence of independent workers' organisations able to harness this movement along class lines, and to overcome the religious and ethnic divisions upon which the Assad dynasty had consolidated its power, created multiple openings: for the regime to carry out savage repression; for various sectarian groups to usurp the anti-Assad movement; and for foreign capitalist forces to intervene on both sides in order to exploit the conflict.

Diverse counter-revolutionary forces have fed each other in a devastating war for supremacy which has displaced more than half of the country's population, killed hundreds of thousands of people and reduced this once beautiful country to a gigantic pile of rubble.

An important turn of events came last December when the regime and its foreign allies recaptured Aleppo, the country's most populous city before the war and its economic powerhouse. It allowed them to come back to the negotiating table this year with significantly more leverage than during the previous, largely token, international peace negotiations.

These developments are taking place in the context of new shifts in the Middle East's ever-changing power relations - regional alliances rendered even more volatile in the aftermath of the so-called Arab Spring, that unsettled the ruling elites' long-standing political arrangements.

The peace talks on Syria recently held in Astana, the capital of Kazakhstan (ruled by despot Nursultan Nazerbayev), reflect the new realignments. Organised under the sponsorship of Russia, Turkey, and Iran, they testify to the recent decline of US imperialism's influence in the Middle East, and the more assertive geopolitical role played by Russia.

While the US remains the world's biggest military power, its uncontested domination over world affairs is long gone. This has led to a situation whereby various other regional and international powers are willing to play by their own rules.

A pivotal axis of such a development can be seen in the tentative rapprochement, since last summer, between two opposing camps of the war in Syria: Russia, a long-time ally of Assad's regime, and Turkey, a historical partner of US imperialism and pillar of Nato, that had equipped and financed an array of right-wing Islamist forces in the hope of bringing the Syrian regime down.

The reasons for this diplomatic twist are multiple. Putin's far-ranging military intervention in Syria since the autumn of 2015 helped switch back the balance to the advantage of Assad and his regime.

In these conditions, Turkish President Erdogan's ambition for 'regime change' in Damascus was quietly brushed under the carpet.

Apart from Assad, the main target of the Turkish state's use of jihadist proxies in Syria was the Kurdish fighters of the YPG/YPJ (People's Protection Units/ Women's Protection Units) who, via their political arm the Democratic Union Party (PYD, an offshoot of the Kurdistan Workers' Party, or PKK) had in the summer of 2012 managed to seize power in the north of Syria following the withdrawal of Assad's army.

Despite the many fault-lines in the PYD's political methods, the Kurds living there were granted rights suppressed for decades by Assad's rule, which helped reinvigorate the Kurdish people's struggle against oppression within Turkey and in the broader region.

Erdogan's attempt to use jihadist fighters to tame the Kurdish movement in northern Syria largely turned into a fiasco.

Far from being diminished, there was a prospect of having a PKK-related group of Kurdish fighters controlling a contiguous strip of land on Turkey's doorstep. Erdogan was compelled to re-adjust his priorities.

The regime and its foreign backers share with the jihadist armed groups a common interest in preventing a genuinely progressive and grassroots movement for social justice and democratic rights from re-emerging.

Isis, for its part, is still entrenched in parts of Syria's northern and eastern provinces. During the final stages of the battle of Aleppo, the group managed to reconquer the desert city of Palmyra, only months after its recapture by Syrian government forces, backed by the Russian army.

This episode shows that Assad's regime is not as strong as it pretends, and that winning local battles and holding regained ground are not one and the same thing. The regime is now confronted with the need for re-establishing state authority over large swathes of hostile, populated land. This will not be an easy task, since the Syrian army is now exhausted and diminished.

A big chunk of the latest fighting has been carried through by Shia paramilitaries from Iran and Iraq and by the Lebanese Hezbollah, with Russian air support. All these people will want their share of the spoils of war, laying the ground for a country extremely difficult to administrate, torn apart by infighting and by a continued, although less intense, civil war.

Also, unless a movement emerges to rebuild a unified struggle across communities, the widespread resentment against the murderous regime of Assad could well be translated into new spikes of sectarian bloodshed and terrorist attacks in regime-controlled areas.

The desperation and alienation in the impoverished Sunni population, who have been at the receiving end of Assad's violence for years on end, will continue to provide extremist armed groups with a recruiting tool to carry on their activities.

The country is in ruins and has several hundred thousand internal refugees. This and the reconstruction will require enormous resources, something which Russia and Iran will probably be far less keen to provide than military assistance. In short, Assad's victory in Aleppo may still prove to be a pyrrhic victory.

Western imperialist powers have largely been sidelined from the talks on the future of Syria, their diplomacy being largely reduced to gestures aimed at not losing face.

The military balance on the ground implies that for now, Assad's regime and Russian imperialism have the upper hand on the battlefield, and Western powers have been forced to acclimatise to that reality.

It is also clear that Assad's army is not strong enough to initiate a new violent war of attrition against the Kurds. Yet the capitalist regimes' interests to restore a balance of power in the region might well be done at the eventual expense of ordinary Kurdish people.

Espousing a programme that unapologetically campaigns against imperialist meddling in the region's affairs will be essential for the Kurdish movement to find open ears among the working classes and poor communities in the rest of Syria and the region.

Similarly, the legitimate right for self-determination of the Kurds needs to be incorporated into the demands of the labour movement and the left - to cement the objective community of interests that exists between all the workers and poor, against all their capitalist and imperialist oppressors.

New movements for change will need to arm themselves with the lessons of the Syrian tragedy. A strong political party armed with socialist ideas could have united the workers and the poor in a revolutionary struggle against dictatorship, sectarianism and imperialism. The lack of such an alternative left the masses' struggle hijacked and crushed by various counter-revolutionary forces.

In these conditions, the end results of the 'peace' talks are likely to entrench a de facto 'cantonisation' of the country.

However, importantly, each time the guns have fallen silent, demonstrations, albeit limited in scope, have re-emerged in various parts of Syria, against the regime, against the fundamentalist right-wingers, and against foreign intervention.

Although such resilience under the most adverse situations shouldn't be exaggerated, these examples remain an encouraging sign that the rivers of blood spilled in the last six years have not been able to completely silence the masses' thirst for change.

Whereas the Syrian masses have experienced a critical defeat, the situation in the broader Middle East will inexorably lead to new revolutionary upheavals, which will offer new opportunities to change the course of history and heal the open wounds of the Syrian catastrophe.