Link to this page: https://www.socialistparty.org.uk/articles/24531

Support floods in for the Cardiff No-Cuts Three 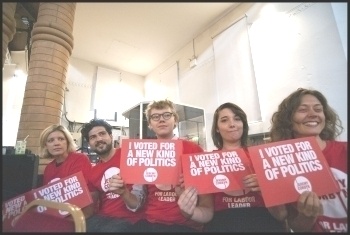 Corbyn supporters want a Labour Party that fights austerity, not one that witch-hunts its members photo Paul Mattsson   (Click to enlarge)

A flood of support from Labour Party members and trade unionists has greeted the appeal of the Cardiff No-Cuts Three against their expulsion from the Labour Party. John Williams, João Félix and Rich Edwards were expelled at the end of January shortly after proposing a motion calling on councillors to refuse to make more cuts to jobs and services.

A solidarity meeting packed out the upstairs of a local pub in Cardiff last Thursday. Messages of support have come from every corner of Britain - Aberdeen, East London, Liverpool and many other places. Even a message from Tony Blair's own Sedgefield constituency came in!

Unfortunately, support has not been forthcoming from all quarters. We've discovered that Darren Williams, a Cardiff councillor and NEC member, issued a call to other Labour members on a secret group on social media for the three to be expelled from Welsh Labour Grassroots (Momentum in Wales), which may have given the green light to the bureaucracy to move against them.

The Labour left is very short-sighted if it is backing this witch-hunt. The Labour Party doesn't stand a chance of being transformed into a party capable of fighting austerity without building a united front of all socialists who are willing to combat the Blairites and Tories who want to wreck the project.

If that is going to happen, Welsh Labour Grassroots (WLG) must adopt a different course. Rich says: "We appealed to WLG for support. Their answer - without meeting with us so we could put our case - was to expel us from WLG as well as Labour! We were blocked from attending the next meeting and they wouldn't even read out the written appeal we drafted. We understand that our motion calling on councillors to fight the cuts was overturned in our absence - despite having been adopted at the annual general meeting only a month ago. Unfortunately, it looks as though WLG/Momentum is determined to assist right-wing Labour councillors to carry out more cuts this year, and is willing to trample on democracy and turn a deaf ear to the pleas for support from Labour members who have been victimised by the pro-Blairite bureaucracy which still runs Labour."

It's increasingly clear that in the upcoming council elections, Welsh Labour is not going to fight on a platform of defending jobs and services, and that the leadership of WLG isn't going to organise a serious fight that could give people hope that Labour could be made to fight austerity. The danger is that, in that context, support grows for the Liberals and Plaid - who will also not lead a fight against cuts - and even Ukip.

The Trade Unionist and Socialist Coalition (TUSC) agreed at its conference last month to keep the option open of standing election candidates for just the eventuality we're facing in Wales. TUSC supporters who have taken part in building the coalition in Cardiff plan to discuss standing candidates in wards which include the worst of the Blairite councillors.

The appeal WLG refused to hear at its Cardiff meeting:

We are appealing to you for your support in our campaign against our expulsion from the Labour Party.

Unfortunately we are not able to be there in person because the Steering Committee of Welsh Labour Grassroots responded to our request for support by expelling us from membership of WLG as well as Labour. It is very disappointing that like Labour, the WLG SC has expelled us without giving us the opportunity to make our case. It seems to us to go against the principles of natural justice.

We were looking forward to developing a joint campaign against the cuts that Cardiff council is planning to agree on the 23rd February. We were delighted that Cardiff WLG agreed at its AGM to support the motion we proposed calling for the council to set a no-cuts budget and fight for more funding. Despite our expulsions, we would still like to take part in such a campaign with you. We hope to see you outside City Hall at 3.30pm on the 23rd to lobby councillors with Cardiff Against The Cuts.

We think it's Labour's last chance to demonstrate before the election that it is now taking a different road to the £100 million+ of funding cuts made so far. We owe it to the ordinary working-class people who rely on these services and jobs to show them that there are Labour members who will fight for them. We expect some will be worried that showing any opposition will weaken Labour's chances in the election but we would argue that the worst situation would be if all Labour members appeared to be united in favour of implementing cuts. Our voters will abandon us and look elsewhere, or not bother to turn out.

Like others who have been expelled and disowned, the pre-Corbyn Labour bureaucracy which favours the Blairite wing of the party has distorted the reasons for our expulsion. They say we have been expelled for having joined other socialist organisations and supported their campaigns.

These rules are undemocratic, and also unwise if Labour is serious about becoming a party capable of fighting against austerity and for socialism. Labour members should have full freedom of discussion and debate and the right to organise together with other members who agree with them to convince the rest of the party. The right wing enjoys these freedoms in organisations like Progress. We should fight to overturn these rules, but with the chance to convince people that Labour was heading in a new direction slipping away, we were not prepared to wait before getting involved.

In any case, this was clearly and demonstrably not the real reason for our expulsions. Labour tolerates organised groups in its ranks as long as they do not present a real threat to the right wing getting their way. But most telling is the fact that while each of us joined Labour at a different time, all of us were expelled together - very soon after raising the motion against cuts.

We can imagine that some will think we should have hidden our support for other socialist organisations. We considered this but rejected it, knowing that if we did so at some stage we'd be accused of dishonesty by the bureaucracy. We also believe that we've got to fight to open up and democratise the party. Labour should go back to its radical roots when it was a federation of socialist, suffrage and trade union organisations, and welcome the affiliation of groups like the Socialist Party. The anti- austerity wing of the Greens could be attracted on that basis too.

We appeal to you to follow in the footsteps of figures like Tony Benn and Jeremy Corbyn, who despite having several disagreements with the Militant newspaper, nevertheless fully backed the campaign of its supporters against expulsion in the 1980s, because they understood that it would open the door to the big business wing - those we call Blairites today - getting full control of the party.

This version of this article was first posted on the Socialist Party website on 14 February 2017 and may vary slightly from the version subsequently printed in The Socialist.

Cardiff Socialist Party: For a workers' inquiry into the Covid crisis