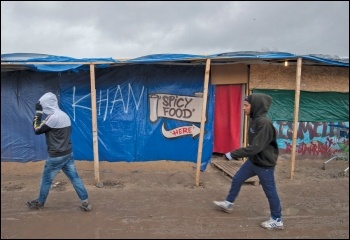 Child refugees at the 'Jungle' camp in Calais before its brutal demolition, photo by Paul Mattsson   (Click to enlarge)

There was widespread disgust after a written statement from the Home Office announced it was to end a vital rehoming scheme for refugee children.

The 'Dubs Amendment' to the Immigration Act 2016 committed Tory prime minister Theresa May to rehome a portion of the 90,000 unaccompanied refugee children from across 'Fortress Europe' with local authorities in the UK.

It was initially assumed that this number would be somewhere in the thousands. But the recent statement capped it at just 350, with 200 children having already been received. Buckingham Palace alone could house that many!

That such a decision can be made in the world's sixth largest economy is an absolute scandal. Not only because of the vast wealth accumulated by those at the top, but because of the complicit role of the wealthy in creating the refugee crisis.

The destruction and extreme poverty caused by the Bush and Blair-led invasion and occupation of Iraq, and the subsequent western imperialist wars to bring about regime change in Libya and Syria, helped create a mass humanitarian refugee crisis. They also created the political conditions for terrorist groups like Isis to take advantage of those radicalised by the horrors of war.

However, it is the population in the region, not western capitalism, that primarily suffers at the hands of Isis. Now those in power want to wash their hands of the consequences.

Ending the refugee programme is an incredibly unpopular move. It is clear that refugee children left alone in the camps are vulnerable to exploitation and human trafficking.

May faces opposition from charities, religious groups and even many from within her Tory ranks. Local authorities have come forward to say they can take in more children. However, support for child refugees must be linked to the fight against austerity.

Central government spending cuts, passed on to the public without a fightback by councils, have created huge pressures on local services such as housing and education. Without a fight to stop the cuts and fully fund services, it is easy for right-wing politicians to scapegoat refugees.

Austerity is a political choice to make the working class pay for a crisis created by the rich, a choice that must be reversed. We need to invest in jobs and homes for all - those already here as well as those desperately fleeing war.