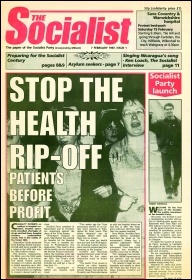 Plus ca change... Issue one of the Socialist campaigned against the privitisation of the NHS   (Click to enlarge)

On the protests against Donald Trump, an unprecedented number of people formed a wall of resistance to his policies. In London mere days after his Muslim ban, what felt like a non-stop wave poured out of tube stations near the protest. The same was felt across the country.

What has struck many of us at these protests is the enthusiasm to topple the rotten capitalist system that Trump stands on, and the interest in socialism as an alternative.

On the 30 January protests alone, 700 people bought the latest edition of the Socialist. Socialist sellers brought people around us by chanting "Socialism not Trumpism" and "read articles by American socialists" to great delight.

We expect these sales to continue, particularly for young people, as we now call for walkouts on the day Trump visits Britain.

The Socialist has always fought against what Trump stands for: capitalism, racism and sexism.

This week is the Socialist paper's 20th birthday. In issue one we carried a feature article by Socialist Party general secretary Peter Taaffe outlining the role of a socialist paper.

In 1997 Peter wrote: "Many trade unionists in the USA are now starting to organise for a party of labour in the US because of growing disillusionment with [Bill] Clinton's move to embrace the Republican Party's ultra-right policies." The political situation in the US has been transformed but the need for a new party is even more acute.

We quoted one billionaire who was terrified that untrammelled capitalism would arouse greater and greater hostility from the working class. Inequality and poverty has only grown, exacerbated by a decade of economic crisis and austerity.

Every year world leaders meet, some predicting that these trends will lead to mass revolt against capitalism. They're right, it has and it will. But while the capitalist class defends the profit system, they are powerless to change the course of history.

Peter concluded with a stark warning: A working class socialist alternative is vital to cut across right-wing forces attempting to express anger against capitalism inequality, and benefit. Socialist ideas battle Trump in the USA, Le Pen in France, and their international acolytes.

That first article made an important appeal, which stands today: "If the Socialist is to reflect workers' lives you, the paper's readers and devoted sellers, need to make sure that there is a regular supply of reports, articles, comments, letters and interviews coming in."

Our paper is unique because working class people who read it also write its content and sell it on to people who want to find out more. Our paper gives 100% backing to every struggle of ordinary people to improve their lives, generally written by the people leading those fights.

Please help us continue to stand up and shout the socialist ideas needed to defeat Trumpism, austerity and capitalism.