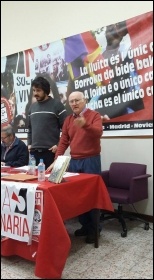 On the weekend of 4 and 5 February, a very successful meeting of the central committee of Izquierda Revolucionaria took place in Madrid.

It was a historic gathering, reflecting both the growing strength and enthusiasm of Izquierda Revolucionaria as a Marxist organisation, and another hugely encouraging stride forwards in the process of unification between IR and the CWI.

Peter Taaffe opened the discussions with an introduction on world perspectives, which was well received by all - underlining the broad and solid political agreement which the process of coming together has revealed at every stage.

This has particularly been seen through the recent successes of the CWI in the US, England and Wales, and Ireland where we have developed a mass influence, as well as the fantastic achievements of IR and its role in the Sindicato de Estudiantes (student union) in the successful mass struggle against the right-wing PP government.

Juan Ignacio Ramos, general secretary of IR, gave an informative and clear introduction on perspectives for the Spanish state, which has entered a new phase of turmoil and mass struggle.

The deep crises engulfing both the ex-social democratic party PSOE and the new left party Podemos reflect a new conjuncture of sharpened class struggle, which could even surpass the dimensions of the last phase of mass protests and strikes between 2011 and 2014.

The meeting voted unanimously on a resolution to endorse and advance the process of unification between IR and the CWI.