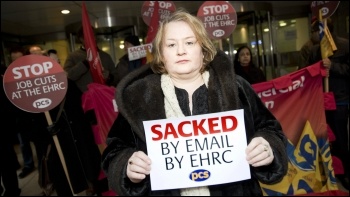 Ten government equality staff were sacked by email and had to clear their desks on 10 February. The Equality and Human Rights Commission (EHRC) workers had been threatened with redundancy, but such action is unprecedented in the civil service.

The notices were emailed while PCS and Unite members were on strike over cuts.

EHRC says the staff will receive pay in lieu of notice, but workers did not agree to this because it closes off the opportunity to seek redeployment at the commission or elsewhere in the civil service. We had members who were in the middle of civil service applications and waiting to hear back from employers.

In London, Finola Kelly, a PCS union rep, was one of the members who had received a compulsory redundancy notice and was leaving her office for the last time with her personal belongings packed in a trolley.

Janice Godrich, PCS national president, was at the offices with a large group of supporters including the National Shop Stewards Network and described what had happened to Finola as "absolutely disgraceful" and "very humiliating".

She said: "I'm really, really pleased at the amount of people who have turned up today, not just from PCS but from other unions and organisations, to show support, and I know that that's happening all over the country at other EHRC offices."

"We're giving a pledge here today on behalf of PCS that we'll continue to fully support these members until their justice is restored."