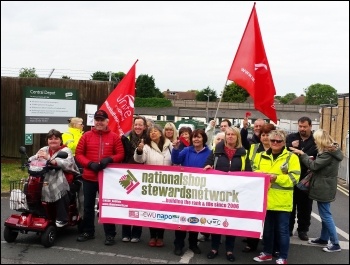 The Bromley public has been asked 'to rise up and make their voice heard', otherwise the borough's 14 libraries will be privatised, with expected severe cutbacks in services. The call was made by Unite the Union, whose library members will be striking for a week from 1-8 April. The union is also organising a petition to collect the more than 500 signatures needed to force the council to debate the issue.

Unite regional officer Onay Kasab said: "The council says that it will be making a decision on the library service's future sometime in May. Unite's firm view is that libraries are for the benefit of the public and should not be considered as a ripe source of profit for the private sector."

US food firm Subway's UK and Ireland subsidiary has advertised on a government website for 'apprentices', to be paid £3.40 an hour. The ad offered 35 hours a week, in exchange for the opportunity to become a sandwich 'artist'.

The National Shop Stewards Network (NSSN) and partners Unite Community and the Hungry For Justice campaign, were quick to apply pressure to Subway on social media. We promised to protest at the offending Gateshead store which advertised the roles. On 19 March, less than 48 hours after our announcement, tweets from @SubwayUKIreland stated: ''Hi, the store owner was unaware of the advert which was posted by a recruitment agency. We are working to have this advert removed immediately.''

We demand dignity, full rights, real contracts, and a real living wage of £10 an hour for all workers. For more information and to affiliate to NSSN visit shopstewards.net, and follow us on Twitter @NSSN_AntiCuts and @NSSN_NE

The POA union of prison officers and allied workers has won at an employment tribunal on behalf of three members, two for unfair dismissal and a third for trade union discrimination.

The POA took strike action despite a government ban on 13 November 2015, when the workers lost their appeals against dismissal. The tribunal remedy hearing awarded them in excess of £40,000 each. Steve Gillan, POA general secretary, said: "This was totally avoidable and I am glad our three members got justice and have cleared their names." 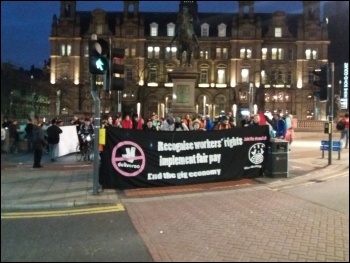 The #Roosistence came to Leeds on 10 March as around 100 people, Deliveroo workers and their supporters, held a cycle protest around Leeds city centre demanding the reinstatement of the 'Leeds 7'.

These seven Deliveroo workers had been part of a WhatsApp group of riders discussing their terms and conditions, including a proposed change from hourly pay to payment per drop. When management gained access to this group in late January they dismissed two workers and five riders were left without fixed hours.

Since then, around 30 workers have unionised with the IWW union locally.

At the protest it was announced that the pressure so far had finally forced Deliveroo to act, sacking the local manager responsible for the dismissals. However, the workers have still not been reinstated.

The trade union movement in Leeds must rally in defence of the Deliveroo workers and support the campaign for reinstatement and union recognition. Please support the hardship fund. 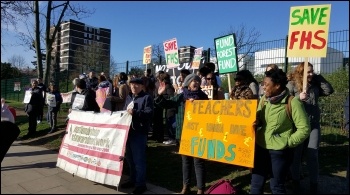 "No ifs, no buts, no Forest Hill cuts!" National Union of Teachers (NUT) members at Forest Hill School, Lewisham on 21 March taking their first day of strike action against compulsory redundancies and the impact on workload resulting from huge cuts to the school. Please send messages of solidarity to the rep Joe Cowley at josephcowley@hotmail.com

NUT members at the school are set to take a further two days of action on 29 and 30 March.