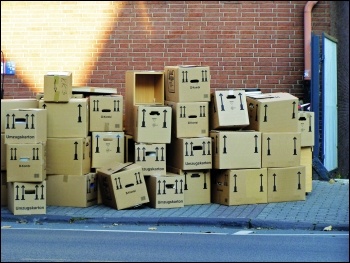 A new rule change will end housing benefit for 18 to 21-year-olds from next month, leaving thousands of young adults with nowhere to go. The Tories have outdone themselves once again.

The Department for Work and Pensions has estimated that 11,000 people will be affected by these new changes, further widening the gap between the super-rich 1% and the 99%.

Although not on housing benefit myself, my mother's housing benefit was cut. Due to me working in a part-time job at the time, I had to pay the rent and support the family - at 18. I was not earning enough while also trying to save for my own home, so my grandparents took me in.

My situation now is not very different. Although still living with my grandparents and having a partner, the possibility of having our own place is far off due to high deposits and low wages and hours.

Under Tory leadership, the number of rough sleepers has more than doubled since 2010 according to government figures. These cuts will only add to the housing crisis caused by capitalism.

The government says this will cut a further £105 million from benefits spending by 2020 - on top of the deadly cuts already implemented. But researchers at Heriot-Watt University reckon the Treasury is unlikely to save much money - a maximum of £3.3 million a year once exemptions are counted.

We're already battling against zero-hour contracts, rising tuition fees and ever increasing rents. And it's the same the world over. In the US, a study by Harvard University found that 51% of 18 to 29-year-olds reject capitalism.

It's undeniable that this generation currently has the worst prospects for securing housing. Only 26% of young adults will be on the property ladder by 2025, according to financial services giant PwC; 60% will rent.

We need socialist change. We need a £10 an hour minimum wage, benefits that actually cover the cost of living, and rent caps. We need a mass party of the working class to campaign for mass building of publicly owned, good quality, low-rent homes.