Link to this page: https://www.socialistparty.org.uk/articles/25116 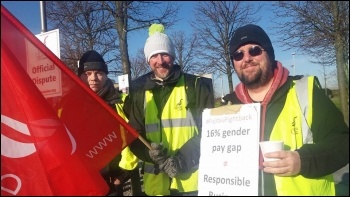 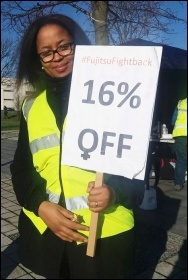 Workers at Fujitsu were on strike again today across the country in their fight against job losses and pay cuts. There was a fantastic picket line outside the Manchester offices with plenty of 'honks of support' from cars passing by.

Strikers were talking to people entering the building (which has offices for other companies too), talking to them about their dispute and asking for donations to their strike fund.

Talks are expected next week but Unite members are clear that it's only through strike action that Fujitsu will be forced to come to the table with a better offer. Further strike dates are likely to be announced if the talks don't go anywhere. 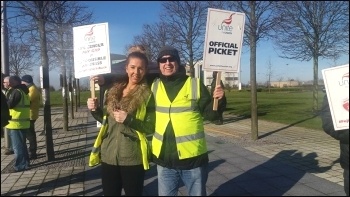 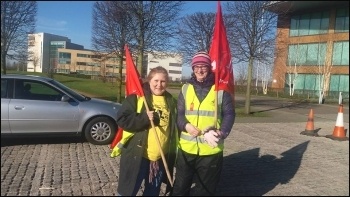 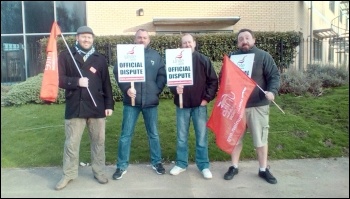 "Some social media comments suggest people see pickets and strike action and think: 'What makes them think they deserve a better deal?'. My response would be: 'What makes you think you don't?'

"To ruthlessly remove the protections and rights provided by the employee consultative body just in time to make redundancies as cheaply as possible shows a lack of respect. We all want to feel valued by our employer; while I and most of my immediate colleagues are currently safe from redundancy there are many that aren't and they deserve the best deal possible.

"The fight is for theirs now, and our future. Who knows whose job will be at risk in one, two or five years' time? Hopefully we can secure jobs and improve terms for these and any future redundancies ... if companies won't uphold terms that they have previously agreed we have to fight for them ourselves."