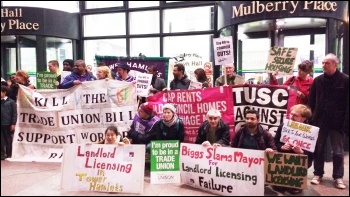 "Save our Nurseries!" This was the chant of local campaigners, mostly women and mothers, who lobbied a full council meeting in Tower Hamlets town hall, east London, on 22 March.

They presented a petition against the privatisation of state-maintained nurseries in the borough.

This is one of the attacks on local services after Labour-led Tower Hamlets council voted through millions in cuts last month.

Tower Hamlets Socialist Party members supported the protest and are organising a meeting on how to build a campaign to fight these cuts on Thursday 30 March, 7.30pm at Oxford house, Bethnal Green, London, E2 6HG.

Speakers include Hugo Pierre, a Socialist Party member who previously stood as a no-cuts mayoral candidate for the Trade Unionist and Socialist Coalition, councillors from the Tower Hamlets Independent Group and members of Save Our Nurseries Tower Hamlets campaign (invited).