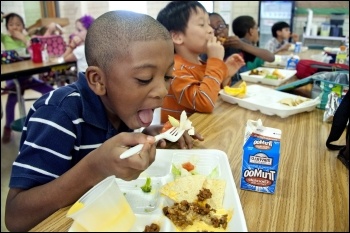 At a time when schools are facing severe cuts to their budgets, Corbyn's proposal is a welcome measure. It is an absolute disgrace that, due to cuts to benefits and the rise of in-work poverty, some parents go hungry so that their children can have a decent meal.

It is no wonder that schools are struggling to fund basic resources for pupils: the school I work at cannot afford to replace basic classroom equipment.

Even more shocking, one primary school in Sussex has had to ask pupils to donate toilet roll and stationery, as it cannot afford to finance these items due to cuts. One in six state schools have sent letters to families asking for contributions of £20 a month or more for around 1.4 million students.

These should be abolished and replaced by a properly resourced state education system for all. No school should have to ask for handouts from parents because they cannot afford resources.

No parent should have to go hungry so that their child can eat. There is enough money in the hands of the super-rich to finance a decent state education for every pupil.