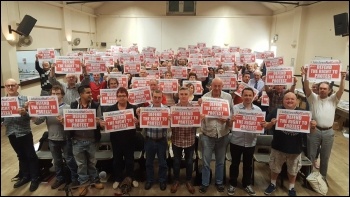 An excellent meeting of over 100 Socialist Party trade union members took place in London on 8 April. It was a real show of strength of the presence and impact of the Socialist Party in the unions.

We have 19 members on union executives and candidates standing in current key union elections, including in Unison, PCS and Unite as well as many others who are reps, shop stewards or working in trades councils.

The meeting took place five-and-a-half weeks after the Tories' new anti-union law, the Trade Union Act, was introduced. A main theme of the day was how the new undemocratic industrial action ballot thresholds would affect workers' capacity to fight.

The consultative ballot on pay by the Royal College of Nurses shows that the massive anger and frustration that exists among workers won't be constrained by these laws. The strike wave developing in Ireland, where the union leaders have been in partnership with the government and the employers, shows how the volatile mood can break through. The anger is building in Britain against the cuts in health and education as well as the continuing pay freeze.

There are already a whole raft of strikes taking place. We've seen important struggles such as the teaching assistants in Derby and Durham and the strikes against driver-only operation being imposed by train companies. An Aslef member reported on the tremendous rejection by the union's drivers of their leadership's brokered deal on Southern Rail for the second time.