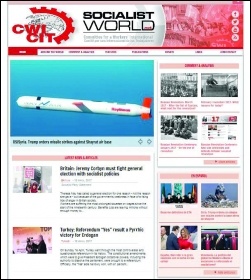 The website of the Committee for a Workers' International (CWI) - the socialist international organisation to which the Socialist Party is affiliated - has undergone a makeover.

Major changes and improvements, including up-to-date layout and design, have been made to socialistworld.net. This includes more use of videos and other media to argue the case for socialism.

Fittingly, the relaunch is in the year of the 100th anniversary of the Russian revolution and has prominent links to the 1917revolution.org site, which was launched by the CWI earlier this year to celebrate and defend the socialist revolution and the genuine Marxist ideas of Lenin and Trotsky.

The website editors extend special thanks to the comrades from Izquierda Revolucionaria (Spanish state) who provided expert assistance for the relaunch.