Link to this page: https://www.socialistparty.org.uk/articles/25321 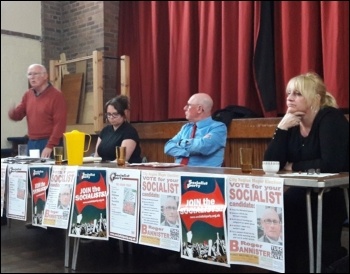 Birkenhead born Peter Taaffe, general secretary of the Socialist Party, returned to his hometown on Monday 24th April to speak about the situation in Britain today and also his new book - 'From Militant to the Socialist Party' - being published soon by Socialist Books. The book is a sequel to the Rise of Militant, also written by Peter, and covers events and the Socialist Party's role between 1995 and 2007.

The contributions from the floor, applications to join the Socialist Party, and a financial appeal raising nearly £700 were testament to the inspiring atmosphere.

Birkenhead has a long and proud militant history, this meeting demonstrates that socialism has a bright future here as well.

This version of this article was first posted on the Socialist Party website on 25 April 2017 and may vary slightly from the version subsequently printed in The Socialist.

Wirral Socialist Party: The theory of the United Front

Wirral Socialist Party: May Day - why is it important to workers