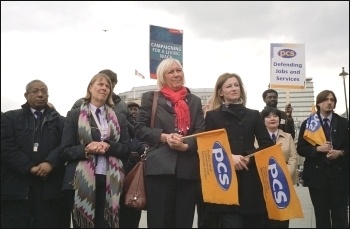 Theresa May's calling of a snap general election on the pretext of needing a mandate on Brexit is a sham. However, the election campaign gives an opportunity to expose and oppose her government's austerity programme and to get rid of the Tories.

Under the Tories, PCS members have suffered unparalleled attacks on pay, jobs and conditions. Services have been cut and privatised and offices closed. More attacks are planned if the Tories get back in.

PCS members and their families are also suffering from the Tories' attacks on workers. Benefit cuts are leaving millions unable to feed themselves. The NHS is facing life-threatening cuts and large-scale privatisation. The housing and education crises in working class communities are acute.

The Tories' draconian anti-trade union laws make it illegal for the likes of PCS members, teachers, nurses and railworkers who work in essential services to strike unless 40% of union members vote in favour with at least a 50% turnout - even though the Tories were elected by only 24% of the electorate.

They are doing this to try to neutralise opposition to the further attacks they are planning to both the welfare state and workers' rights.

The election will raise many issues, including the possibility of a further referendum on Scottish independence and the political situation in Northern Ireland. Immigration will be an issue exploited by the Tories and the right-wing press. PCS Left Unity is opposed to all forms of racism and will continue to campaign for workers' unity.

Left Unity welcomed the election and reelection of Jeremy Corbyn as Labour leader on an anti-austerity programme. We also welcomed his commitment to end cuts in the public sector to pay, jobs, pensions and services. Labour must campaign in this election on the basis of socialist policies, rebuilding the welfare state and the public sector and against austerity.

Left Unity believes PCS members should support candidates prepared to commit to our union's policies, and would welcome the election of Jeremy Corbyn as prime minister with a Labour government committed to an anti-austerity agenda.

As socialists in PCS, we believe this election gives an opportunity to get rid of this vicious Tory government in the interests of our members and class. Whatever the outcome of the general election it is important that we have a PCS leadership capable of dealing with the challenges that face our union and its members.

It is vital to secure a Democracy Alliance victory in the PCS elections, which is necessary to defend pay, jobs and services. Left Unity urges everyone to work hard to achieve this.