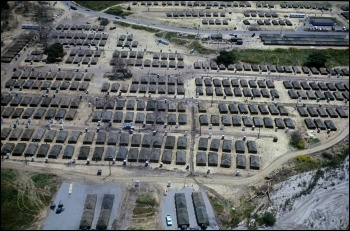 To justify calls to reduce the foreign aid budget, parts of the capitalist establishment have pointed to the corruption that permeates the business of aid.

They're not wrong. Adam Smith International, one of Britain's largest foreign aid contractors, has seen four senior executives resign over questions of ethical integrity. And the Independent Commission for Aid Impact has euphemistically suggested that UK aid in Libya could cause "unintended harm" to vulnerable migrants.

Some voices on the right say that reducing Britain's contributions - supposedly for the global poor - will somehow solve issues of corruption. Of course, it won't. Corrupt politicians and executives will simply take a bigger cut.

The response of the Conservative government has been to provide £10.4 million in funding for Libyan refugee camps - condemned globally as feeding grounds for human traffickers - without any analysis of the human rights impact of such a project.

Libya's GDP is a third of what it was in 2008. Workers have been made to pay for lucrative reconstruction contracts in a country we were also billed to destroy.

The truth is that while famine kills in Somalia, parliament funnels money into organisations which advocate free-market capitalism - and sell it to the public as 'aid'.

Capitalism cannot fix the poverty it creates in its drive for profits. In order to make a meaningful difference to workers and poor in other countries as well as our own, we need to take the economy out of the hands of the super-rich, and build a socialist system based on collective ownership, democratic planning, shared prosperity and humanity.