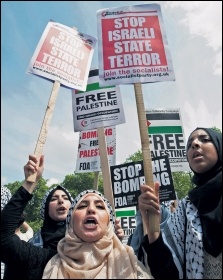 Protesting against the Israeli government's attacks on Palestine, photo by Paul Mattsson   (Click to enlarge)

The Strike of Freedom and Honour is the name given to an indefinite mass hunger strike of hundreds of Palestinian prisoners in Israeli jails, which started on Palestinian Prisoner Day, 17 April.

The prisoners are demanding the ending of discrimination on national grounds in prison and arbitrary detention without charge or trial ('administrative arrests'). The prisoners' protest is also against medical neglect, solitary confinement, violation of rights to visits, prohibition of telephone calls and denial of the right to academic studies.

Every week sees dozens of military raids on homes of residents throughout the West Bank. Residents are removed from their beds in the middle of the night as a matter of routine.

Aside from the security prisoners held by the IPS, hundreds of Palestinians are held after being criminalised by the occupation authorities as 'illegal stayers', usually after seeking work in Israel; and dozens more Palestinians are held in military and police facilities before being transferred to the IPS.

Since October 2015 some 10,000 Palestinians have been arrested by the Israeli authorities, about a third of them under 18.

Israeli regime propaganda seeks to systematically mark all Palestinian security prisoners as murderers. Even if this was true - and it is not - criminal murderers get better incarceration conditions.

However, the sweeping indictment is intended to silence public criticism and torpedo discussion on the reality of the occupation. Many of the prisoners were imprisoned for the sole fact of their involvement in a political struggle against the occupation and the national oppression of the Palestinians.

In contrast, Ami Popper, a Jewish security prisoner who slaughtered seven Palestinian workers on nationalist grounds, is entitled to holidays from prison, regular phone calls with relatives and even a place of work outside the prison.

Palestinian security prisoners are not entitled to any of these. Since 2011, they have been deprived of the right to study at the Open University, because they are not Jewish.

This follows a cynical measure of collective punishment imposed as a means of exerting pressure on Hamas (the right-wing Islamist Palestinian organisation that controls Gaza) to release the captured Israeli soldier, Gilad Shalit.

The policy remained in place even after the prisoner exchange deal that was eventually conducted in the same year.

The prisoners' main demand is for public telephones to be installed in their prison wings so that they can talk to their relatives. Not only does such an arrangement exist in the criminal wings, but also the most famous Jewish security prisoner, Yigal Amir (who assassinated Israeli prime minister Rabin in 1995), is allowed to talk to his family by telephone. Palestinians are forbidden from doing so.

The current action is the largest hunger strike since 2012, when about 1,500 prisoners went on hunger strike for nearly a month and achieved some improvement in conditions.

A series of hunger strikes by administrative detainees managed to bring about the release of detainees without an indictment, which only proved the claim that they were arbitrarily detained and refuted the claim of their alleged danger.

But the Israeli establishment continues to view hunger strikes among Palestinian prisoners as a threat.

The forced-feeding law approved by the Knesset (Israel's parliament) in 2015 is designed to help the state subdue hunger strikes.

The Israeli Medical Association (doctors' trade union), as part of the policy of the World Medical Association, issued a vocal criticism against the law and ordered doctors not to cooperate with it. The lack of collaborationist doctors who would agree to break the hunger strike has now led Prime Minister Benjamin Netanyahu's officials to consider flying doctors in from abroad to do so.

Most of the hunger strikers are identified with Fatah (the biggest faction of the Palestinian Liberation Organisation). Additionally, hundreds more prisoners identified with Hamas and PFLP (Popular Front for the Liberation of Palestine) are taking part.

The most prominent leader of the current strike is Marwan Barghouti, one of 13 Palestinian MPs (members of the Palestinian Legislative Council) imprisoned by Israel and considered the most popular Palestinian leader today - sometimes called the 'Palestinian Nelson Mandela'.

Barghouti, who was one of the leaders of the militias affiliated with Fatah - the Tanzim and the Al Aqsa Martyrs Brigades - survived an assassination attempt in 2001 ("targeted prevention") by the Israeli military.

He was arrested during a military raid on Ramallah the following year and convicted in a civil court for responsibility for approving terrorist actions against civilians on both sides of the Green Line (the political border between Israel and the occupied territories), in which five people were murdered. Barghouti denied the allegations, gave up legal defence as a protest against the trial, and claimed he was opposed to harming innocent people.

It should be emphasised that the socialist left opposes the use of terrorist methods in struggles. Contrary to the propaganda of the Israeli establishment, not every person who wages an armed struggle against the occupation is a terrorist.

And isn't Netanyahu responsible for issuing instructions for actions, such as the bombing of highly populated areas in the Gaza Strip, in which many Palestinian civilians died?

Barghouti's popularity is a cause for concern for the Israeli establishment. While Palestinian Authority President Abbas continues to maintain full arrangements with the occupation regime, Barghouti corresponds with the public rage against the Palestinian president, who is reaching the end of his road.

In recent years he has called for a new popular intifada. His challenge to Abbas' leadership is also the reason why, despite coming first in the election in December to the Fatah central committee, Abbas refused to appoint him to the position of deputy chairman of the Fatah movement.

Abbas has paid lip service in support of the hunger strike, but has no interest in it. He does not want Barghouti to profit politically from the hunger strike or the development of a popular protest movement around it - at the time when he puts his trust in Donald Trump and wants to show he has control on the ground in the Palestinian Authority enclaves.

Many thousands took part in protest marches held on Prisoner Day throughout the West Bank, particularly in Ramallah, Hebron and Bethlehem.

The protests in the West Bank are facing military repression, which could worsen later. During the first two weeks of the hunger strike, the highest number of Palestinians injured by Israeli forces in the West Bank since the beginning of 2017 was recorded, with 191 injured, including 45 minors (OCHA figures).

Solidarity demonstrations have been held in several countries around the world, and the International Trade Union Confederation (ITUC), of which the Histadrut (Israeli trade union organisation) is affiliated, published a solidarity statement.

As usual, the Israeli government and the tops of IPS declare they have no intention to negotiate with the prisoners.

Nevertheless, according to reports, negotiations between the prisoners and the IPS took place during the weeks leading up to the strike, and if the strike intensifies, they will probably be renewed.

Israeli demonstrators must stand alongside Palestinian demonstrators. And the Israeli Medical Association is, on this issue, an example to other trade unions.

It is necessary to rebel against draconian legislation and attacks by the right-wing government. The prisoners' protests should help to build a stronger movement against the occupation and perpetuation of the national conflict, against the war on workers and poor, and for peace, equality and socialist change.