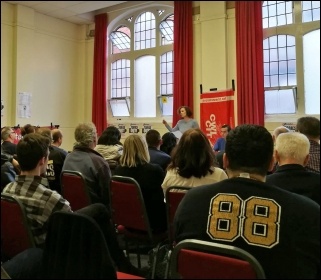 At short notice 60 people packed in to hear Hannah Sell, Socialist Party deputy general secretary, speak in Coventry on 10 May.

The meeting discussed the socialist policies needed to defeat the Tories and the role socialists can play in that battle.

A fantastic speech from Hannah touched on the weakness of the Tories and crisis among the capitalist establishment, not only in Britain but across the world.

Hannah attacked the Labour right wing and their tactics of sabotage against Jeremy Cobyn and his radical left policies.

Like much of the country Coventry has Labour MPs and a Labour council who either spend more time attacking Corbyn than the Tories or just don't mention him. Not one election leaflet in the city has even mentioned Corbyn yet - nor his socialist policies!

Members and supporters of the Socialist Party will continue to campaign in force, drumming up support for Corbyn's anti-austerity policies and the socialist policies we need to defeat the Tories up to 8 June and after!