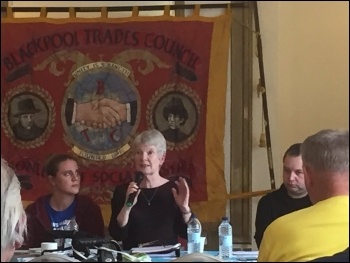 A lively all-day public meeting saw 'Blackpool deserves better' launched on 13 May. The meeting was organised by Blackpool trade union council and the BFAWU bakers' union around an anti-austerity theme after seeing the town devastated by cuts and racked by zero-hour contracts and low pay.

In a powerful speech, BFAWU president Ian Hodson, from Blackpool himself, put the demand for a minimum wage of £10 an hour, with no age exemptions, centre stage and welcomed its inclusion in Jeremy Corbyn's election manifesto. This was echoed at the end in a strong speech from Salford Labour MP Rebecca Long-Bailey and emphasised by a McDonald's worker.

Another leading trade unionist, originating from the local area, PCS assistant general secretary Chris Baugh, recounted the devastating public sector cuts. But Chris reminded the audience of the mass November 2011 pensions strike that, if continued and escalated, could have inflicted a defeat on the Tories.

Rob Williams from the National Shop Stewards Network said that there were major disputes breaking out all the time that showed the combativity of workers, such as the Royal Mail workers who walked out in support of victimised reps.

Chris also spoke about the other major theme of the day, the need to invest in jobs using green technology. This is a massive issue in the area as the Tories have allowed fracking to go ahead despite continuing mass opposition. PCS is launching a pamphlet by Chris at its annual conference on the need for 'green' jobs.