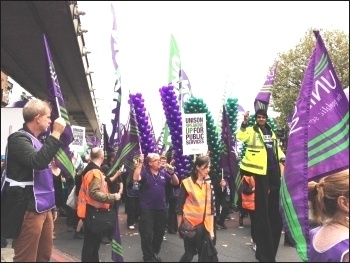 But in contradictory fashion, Unison's machinery has continued providing unswerving political cover and support for these right-wing and anti-Corbyn Labour groups which permit zero-hours exploitation. This puts the Unison leadership at odds with the Labour leader and Unison members who support him.

In a Unison press release in March, general secretary Dave Prentis said: "Councils must stop ignoring the use of zero-hours." Many councils deny using them altogether, citing their use of 'casual' contracts - the only difference being that staff are not forced to take shifts.

All the most contentious elements of zero-hours work remain. One North East council is even using a 'Task Rabbit'-style system, sending email alerts of work available over a period of whole weeks, available on a first-come, first-serve basis.

Contrast Unison's soft-spoken and 'words of advice' to Labour councils with Unite's long public campaign against zero-hour contracts and casual work, which I and other Unison members have proudly collaborated on.

As Unison conference approaches, and in the wake of TUC figures confirming over one million people are now employed in these awful circumstances, Unison must get tough. Talk is cheap and completely inadequate, especially now that zero-hours council staff are being frozen out of the local government pension scheme.