Link to this page: https://www.socialistparty.org.uk/articles/25497

National Shop Stewards' Network (NSSN) supporters once again traveled up from Bristol and Gloucestershire on Tuesday 16th May to bring support and solidarity to BMW workers at the Mini plant in Swindon.

Workers at the German car manufacturer, represented by Unite, were taking another day of strike action as part of a series of planned stoppages in defence of existing pension rights which are under attack by the company.

Negotiations are ongoing and the striking workers seemed in determined mood and reported that the strike was still solidly supported. Strikes are due to continue at various Mini and Rolls Royce sites in southern England. 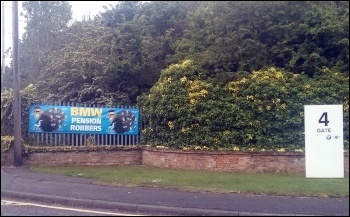