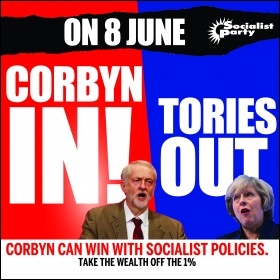 Corbyn can win with socialist policies

While Jeremy Corbyn has been speaking to thousands of ordinary people at mass rallies across the country, 'strong and stable' Theresa May has been running scared.

She's refused leaders' debates and is hiding in a bubble of handpicked supporters, avoiding the public.

A disastrous interview with the BBC's Andrew Neil may explain why.

May floundered while trying to claim the Tories weren't making a u-turn on social care funding. They've been forced to concede a cap on what people will pay for care, just a few days after their manifesto implied unlimited costs for anyone with a home worth over £100,000. This hasty change to a hated policy, dubbed the 'dementia tax', follows a long list of u-turns made in office.

And now the Tories' complete inability to prevent terrorist attacks - as well as their cuts to emergency services putting people at more risk when such attacks take place - will be another key factor in the election.

The Tories think they will win and are trying to run down the clock before polling day. But this overconfidence is a mistake. The latest opinion polls show Corbyn's Labour has surged, slashing the Tories' lead in half. This is on the back of a manifesto which promised popular policies of nationalisation of utilities, raising the minimum wage and taxing the wealthy.

This election is still to be won. 90,000 under-25s registered to vote on 21 May, just before the deadline, joining another 700,000 who have registered since the election was called. This generation solidly supports Corbyn and can upset pollsters' predictions about who will vote.

Corbyn can still win the election if he maintains this momentum. He needs to make sure that the message of 'for the many, not the few' and the left-wing manifesto pledges are heard by everyone.

In many places that means campaigning over the heads of Blairite MPs who want to ignore policies and campaign only on their personal records. Corbyn should speak at well-organised mass rallies in every major city, with thousands of leaflets available at each so his supporters can spread the message directly.

Comparing pro-worker policies to Tory destruction of public services can overturn the poll lead and make calling this election one u-turn that May really regrets.