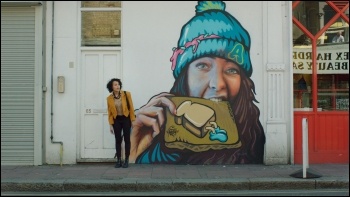 'A Moving Image' is a stirring film looking at gentrification in Brixton, south London. It tracks a young woman, Nina, moving back to a fast-changing Brixton.

Old cafes are closing and being replaced by unaffordable coffee shops. The lead characters, who were equally proud of and embarrassed by the area in their youth, watch an influx of richer people buying property and local people being forced out by the bullying Labour council and rising rents.

At the Q&A after the show were director Shola Amoo, lead actor Tanya Fear, and representatives from the Focus E15 single mums' housing campaign and the Socialist Party.

Amoo said the film aimed to tackle the micro-impact of gentrification, such as mental health and the breakdown of communities. The macro-impact was raised by the Socialist Party: housing policies such as Thatcher's 'right to buy', the removal of rent caps, the lack of council house building and 'regeneration' of estates which have forced people out of the area.

Amoo explained that he and the film's producer, Rienkje Attoh, both had complicated relationships with gentrification being from the area. They were wondering if they were part of the problem.

For example, Nina lives in a grand empty building as a "property guardian," a post where people pay slightly lower rents as live-in guards on vacant properties. The film then follows Nina making a film about gentrification.

But not everyone is as excited about her project as she expects.

She's accused of being part of the problem, and that her project isn't a solution to the genuine experiences of people living in Brixton. Accepting this, she uses her media connections to raise money for a local social housing campaign.

Class and race are important themes in the film. Characters discuss how the working class is being forced out of the area and how its predominantly Afro-Caribbean community is being dismantled. Nina looks into local history such as the Brixton riots to help her understand why the community in Brixton was so important to people there.

A Moving Image is well worth a watch and will defiantly spark debate about regeneration versus gentrification, as well as housing policy, class and race.